Today paranormal investigator Timothy Yohe is back to share an update about the latest explorations into Molly Stark Hospital. His previous post was Is the Molly Stark Hospital in Ohio Truly Haunted?  Timothy has provided plenty of new photos, so I hope you enjoy this revisit to one of the most mysterious abandoned hospitals in the U.S. 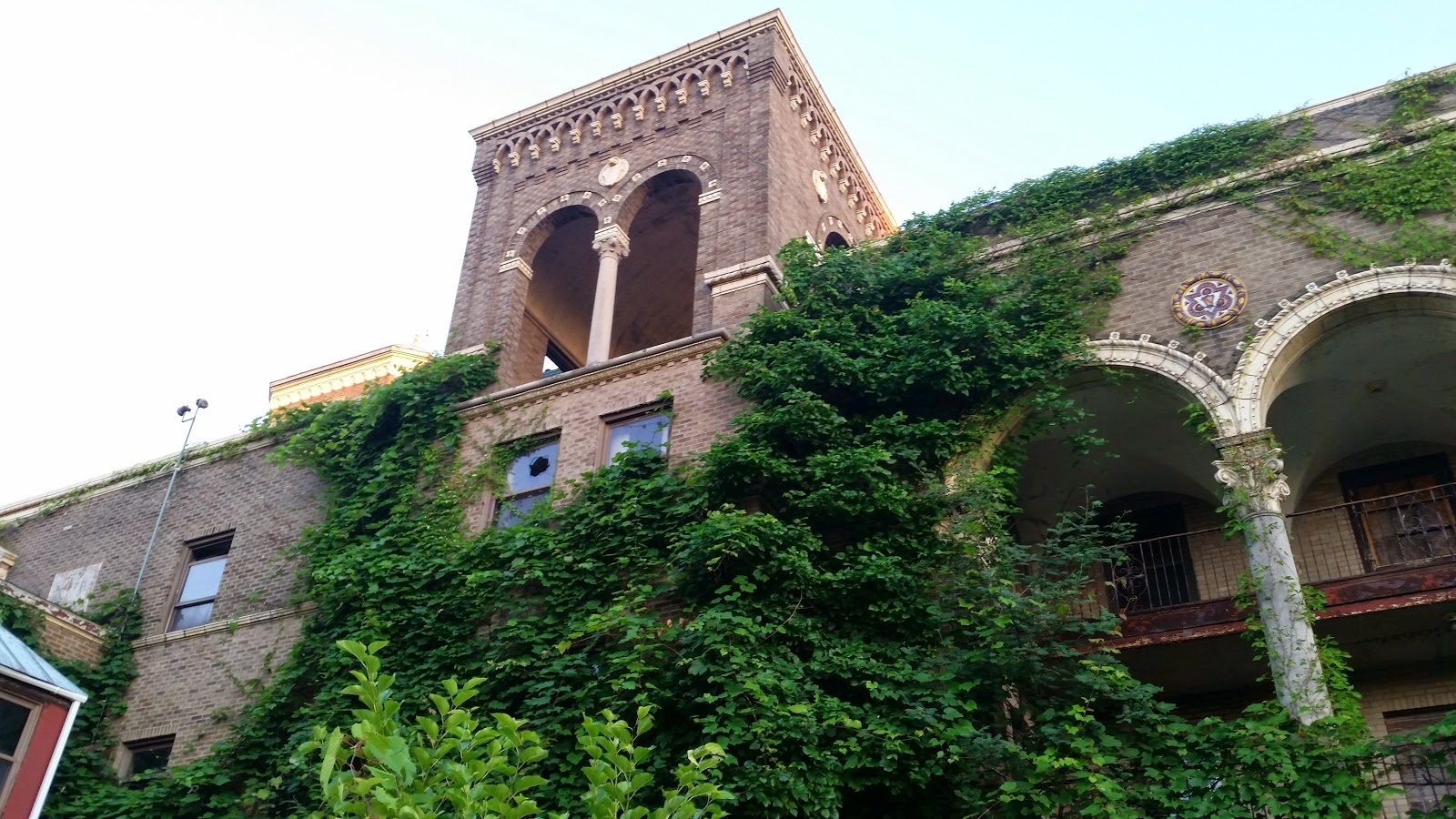 Over this past summer I had the opportunity to travel back to my hometown in Ohio and pay a visit to my family. This trip was taken literally right before our first grandchild was to be born. I knew I was taking a chance on missing his birth, but my intuition told me he would wait for my return. Following that same instinct that I use in paranormal investigations, we jumped into the rental car and headed for the eastern horizon. 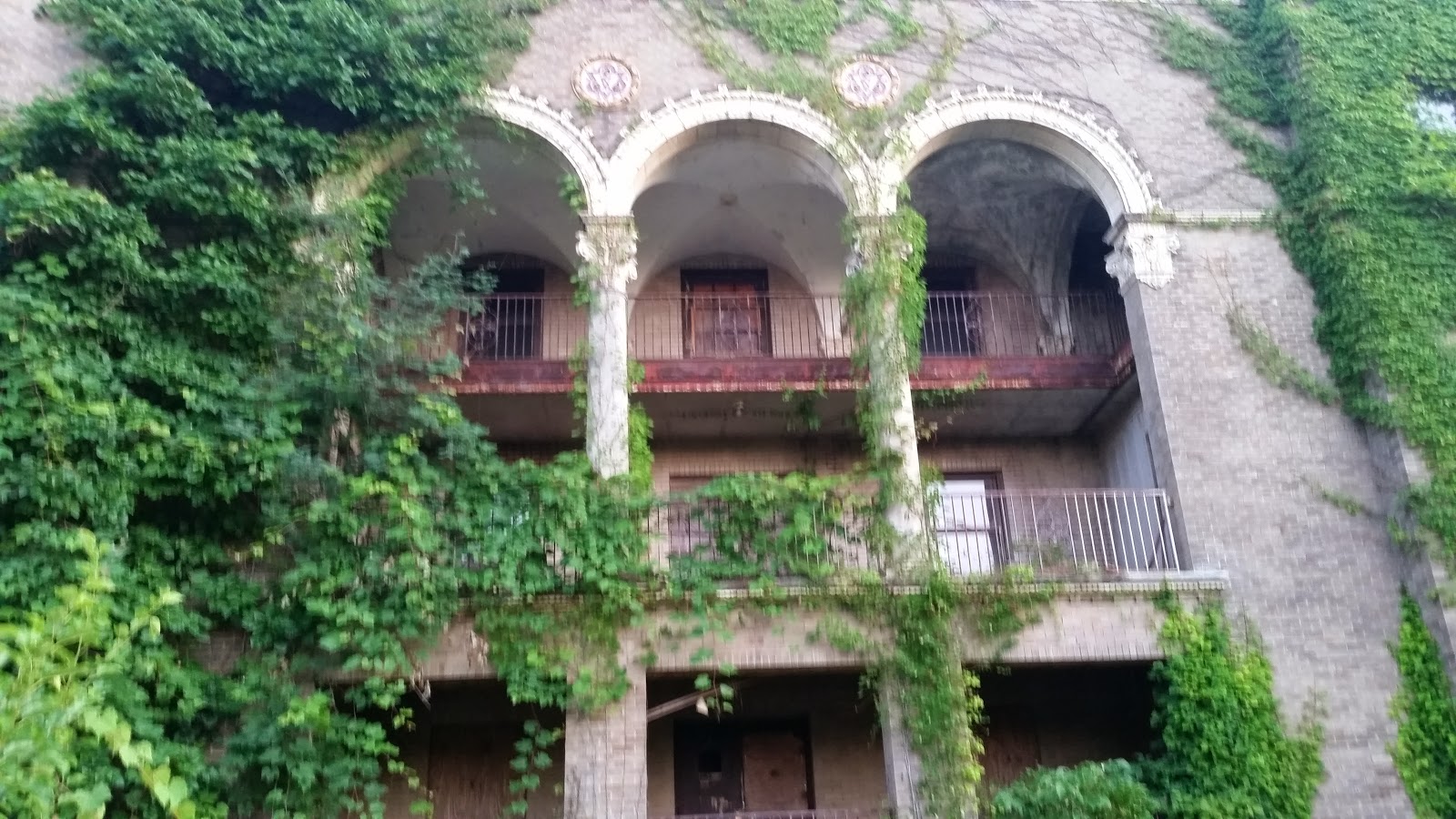 When I left for Ohio, I hadn’t really planned to make another visit to the Molly Stark Hospital. This was just a trip to see our folks, although it was looming in the back of my mind. On previous investigations we had had great success capturing orbs, hearing voices, and I even encountered at least one of the site’s residents when I entered in through a back window and explored the basement. It was really cool to document my first article of a paranormal investigation and, yes, I owe a lot of that to Brian Moreland. His invitation to guest write this story for him (we met on his Trans-Allegheny article) has launched a passionate blog with an even more amazing community tying it all together. Thank you Brian!
During those investigations that started back in 2012, my bother-in-law and nephew tagged along for the experience. In our short time there a passion got fired up within my nephew, who was 14 at the time, and now he loves to pursue the paranormal. He now visits the site on a regular basis with his friends and continues to capture activity. So, naturally, during the first night of our visit, he proposed a return to the hospital grounds. How could I refuse? 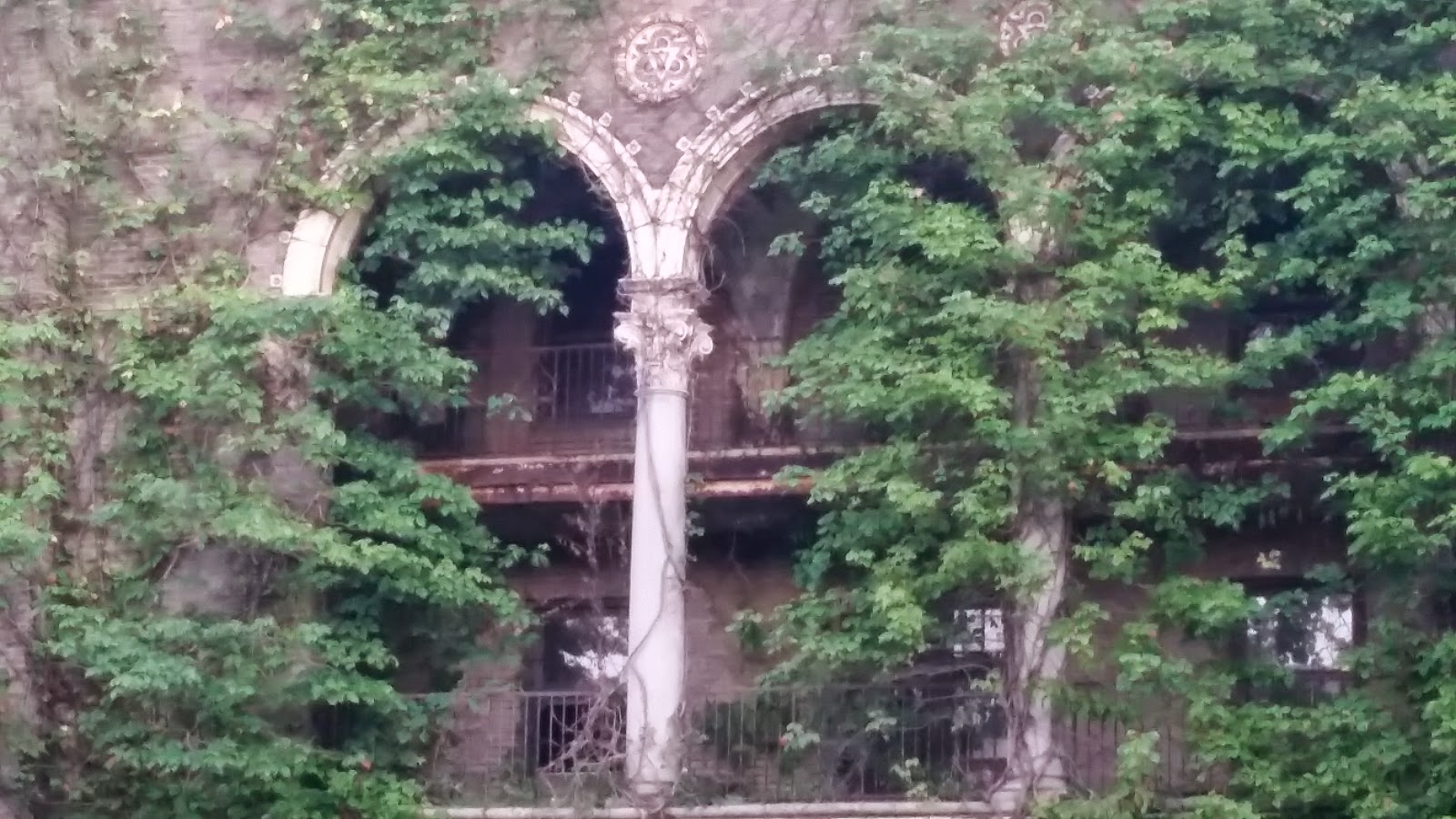 On each of the previous visits we had focused on the three-story hospital in search of activity. We captured voices coming from the ventilation shaft, orbs present in the balcony overhangs, movement in the windows, and when I ventured down the hallway, I could hear footsteps coming down the stairs that made the hair on my arms stand on end. I believe that some of the residents here have never left and my experiences have absolutely confirmed this suspicion. 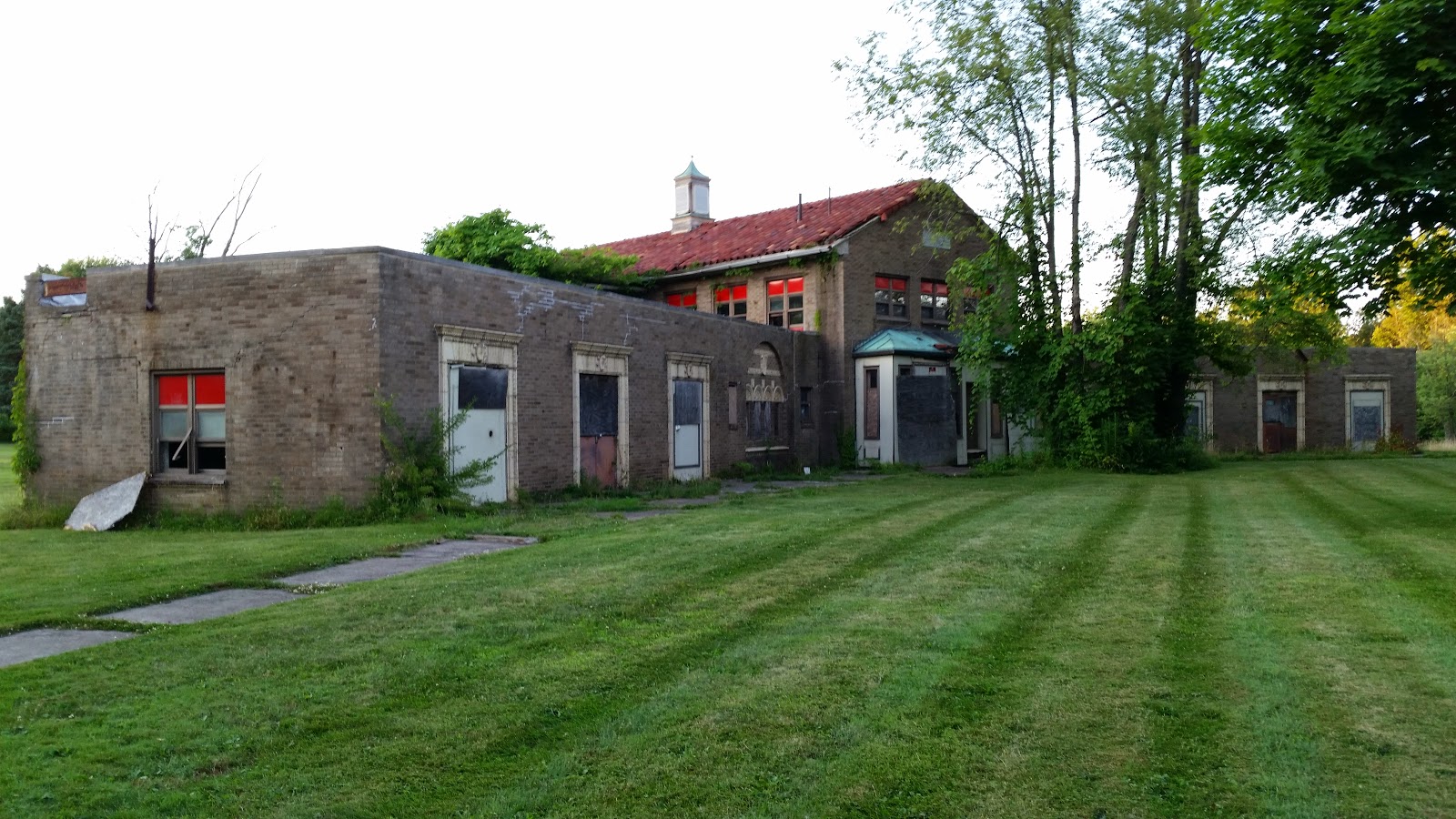 This time we started our investigation with the smaller building, shooting many digital photos as we walked around its perimeter. We were unable to capture any visual evidence, but we were able to still-frame some of the beautiful architecture on this building. 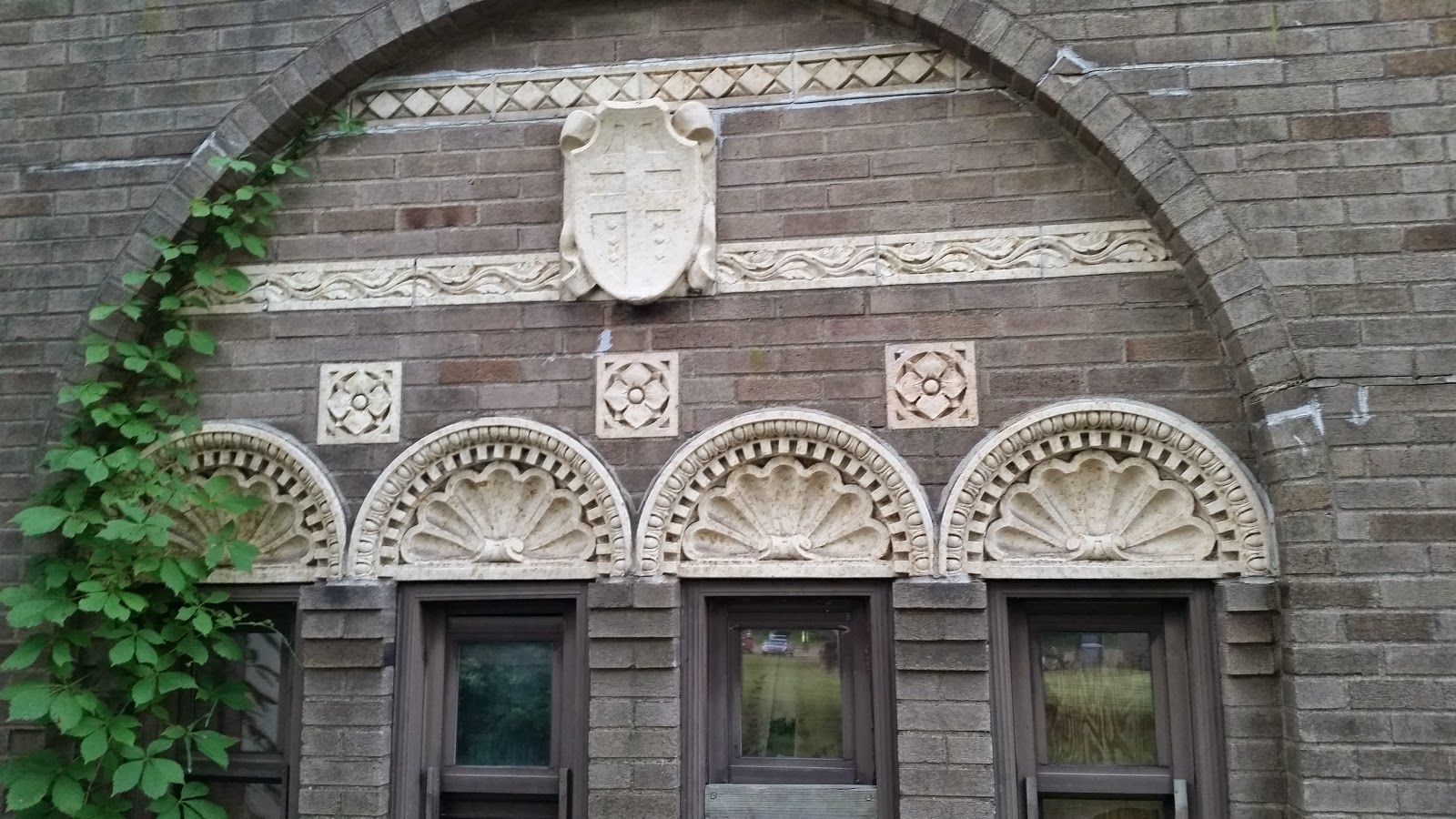 The only spot that was in question was a second-story window that was open on the back side and seemed to have someone peering out from it. There wasn’t any background light to contrast the darkness, there was simply that feeling you get when someone is watching you. It was quite creepy, but no documentable evidence to be had as proof. 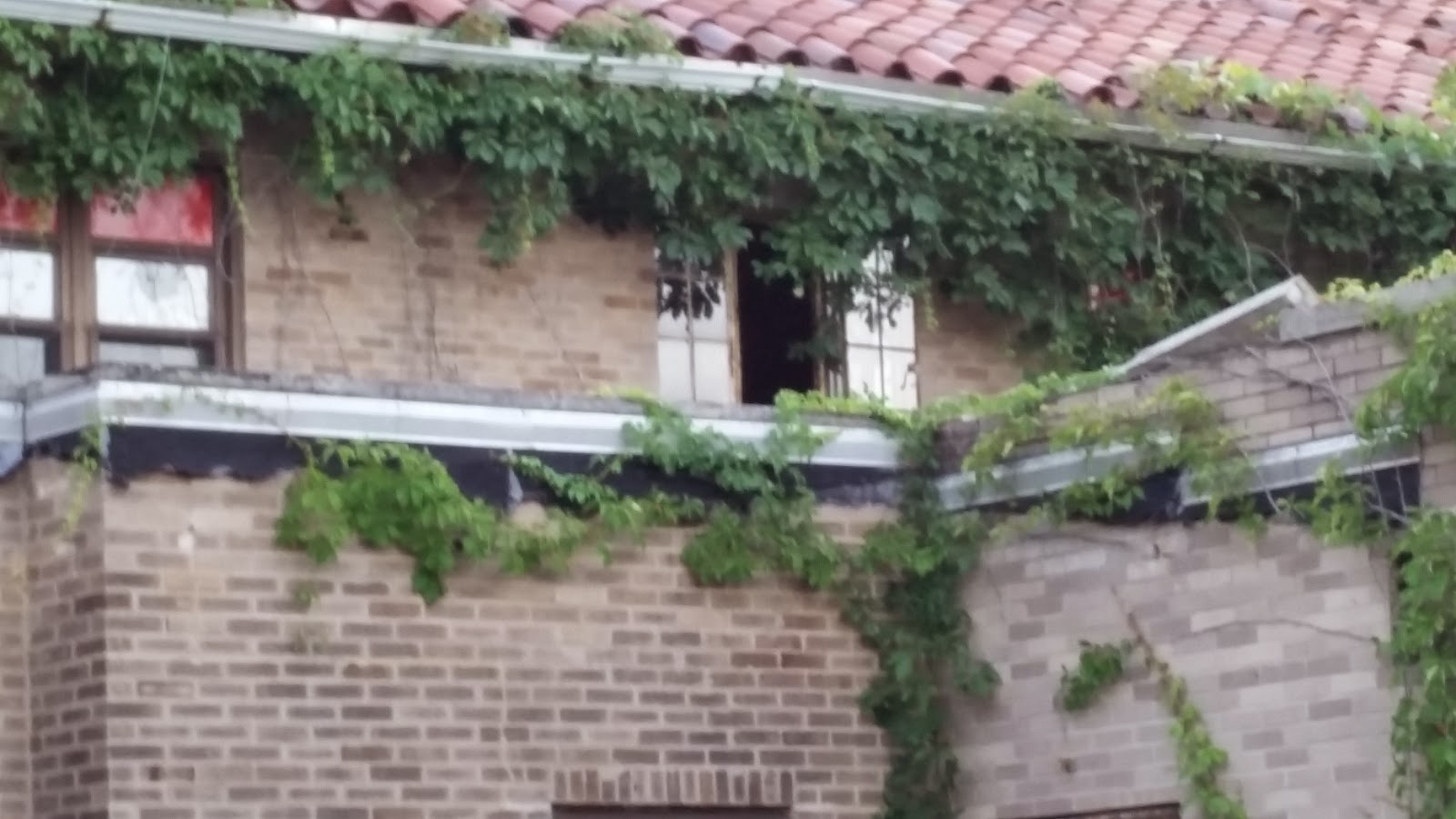 I did bring an electronic voice recorder with me and kept it running the whole time, sticking it in through any opening and trying to remain as quiet as possible as we walked. At one stop on the route I did find an open window and we think we may have captured a female voice uttering about three words. It is very difficult to ascertain what is being said because the device is more suited for recording college professors than paranormal activity. I am hoping by this summer I can obtain a good DVR so I can finally get good audio recordings. Good evidence supports good paranormal claims. 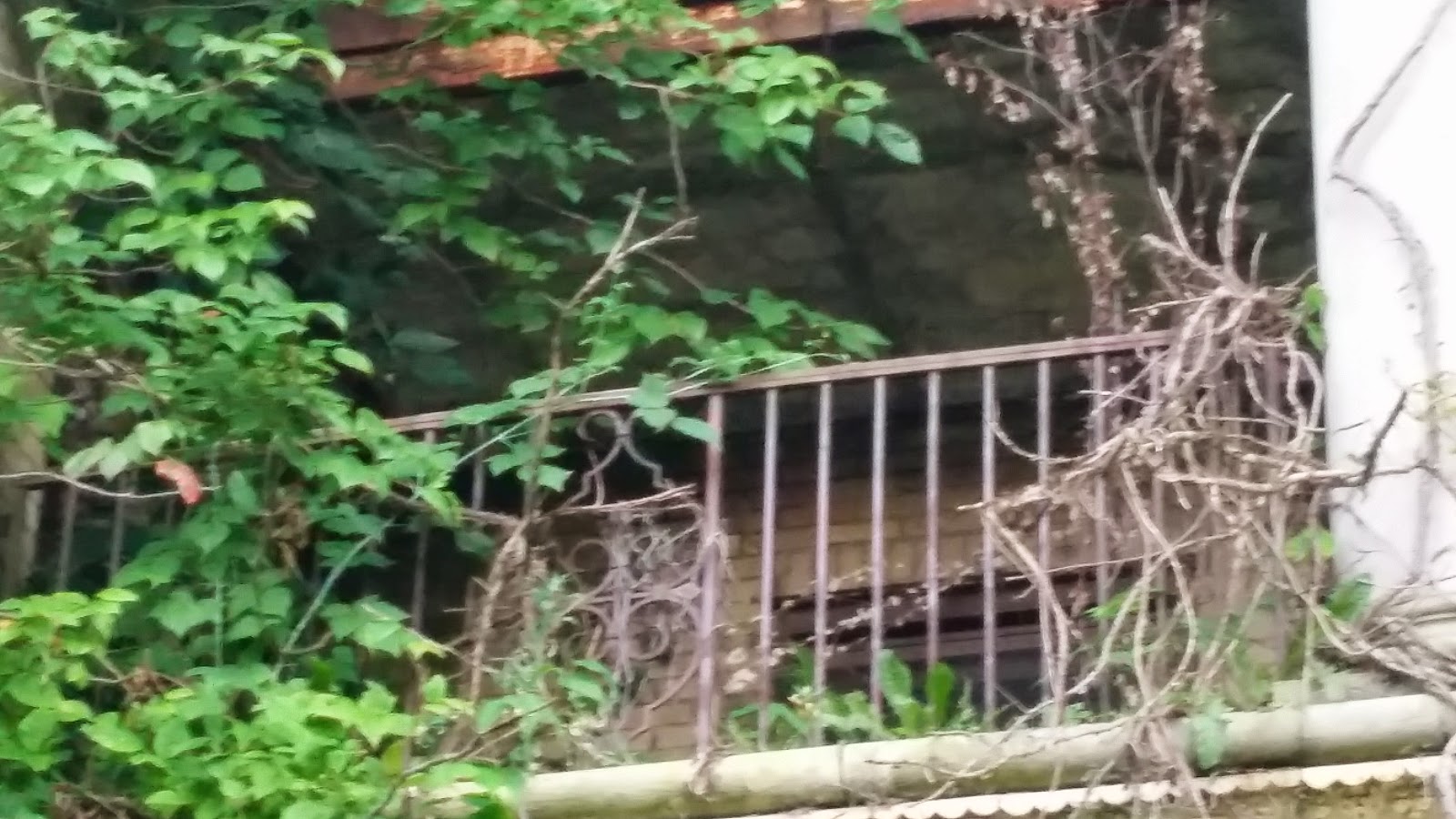 After we finished investigating the smaller sanatorium, we ventured over to the hospital just to see if, by chance, we could capture any of the activity like the previous times we were here. Since our last time, my nephew said that he and his friends have done some extensive investigating on the property and have heard quite a few sounds they were unable to identify. One time his friend’s dog had a reaction to something inside the building because he started barking and prancing erratically. After pulling him away and moving further down the building, he did settle down. They were not sure exactly what to make of that incident. Animals do have abilities to detect things we cannot and their senses of smell and vision are keener than ours. That is one reason the Ghost Hunters team brought along their dog, Maddie, on several of their investigations. Jason Hawes, founder and lead investigator, wanted to see if Maddie could be helpful, and she was on many occasions. 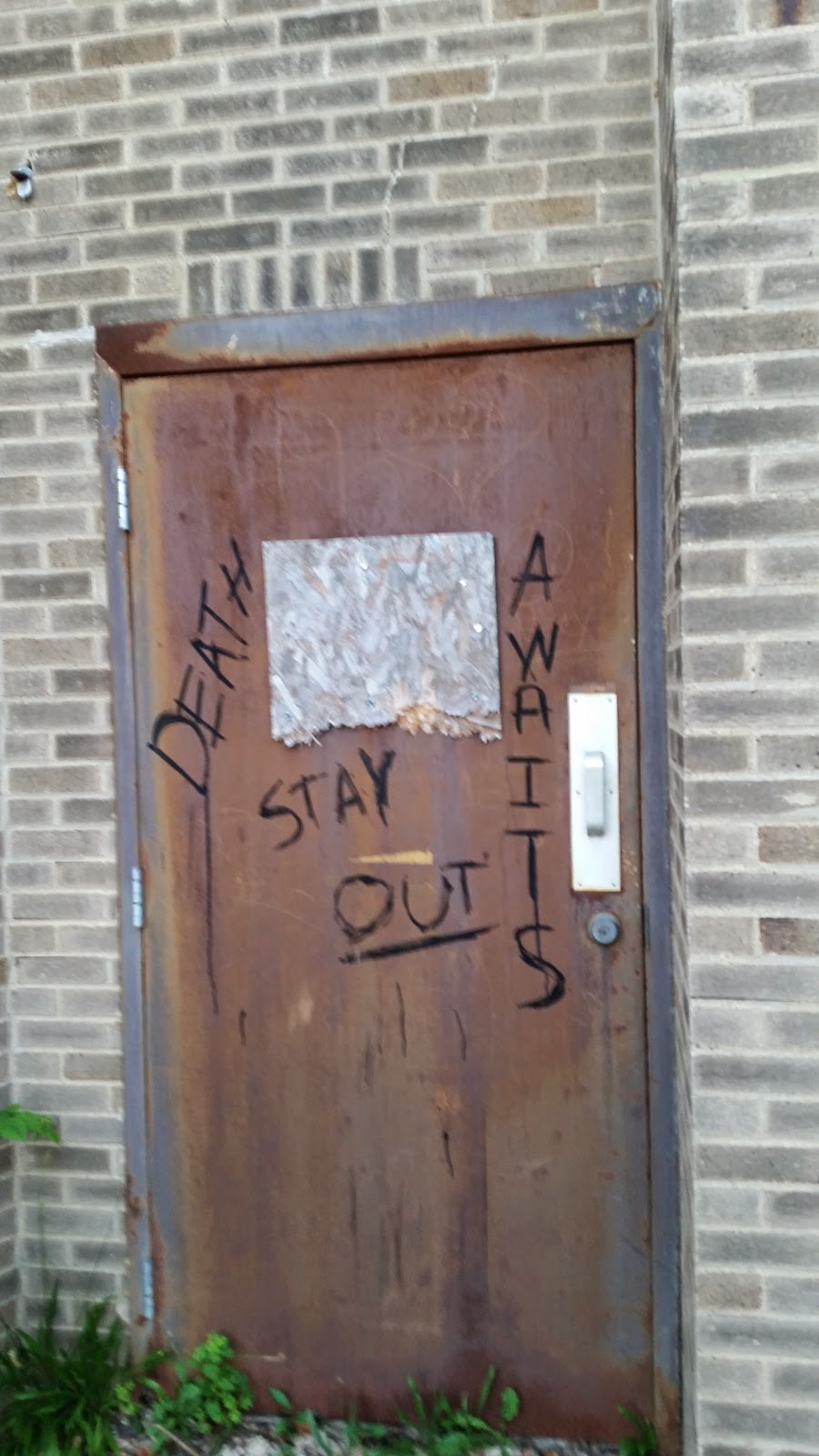 As we made our way around the first corner, we encountered the warning “Death Awaits” written in graffiti on a wooden door. Indeed, every effort was being made to keep people out of the Molly Stark Hospital, not only because it is a crumbling danger zone, but also because it is full of asbestos. I did not know this fact when I entered the building a couple years earlier. I am hoping that by not wearing a mask that I won’t catch asbestosis later in life. Goes to prove, make sure you thoroughly research your sites before you do an investigation. This is good advice I would give to anyone. 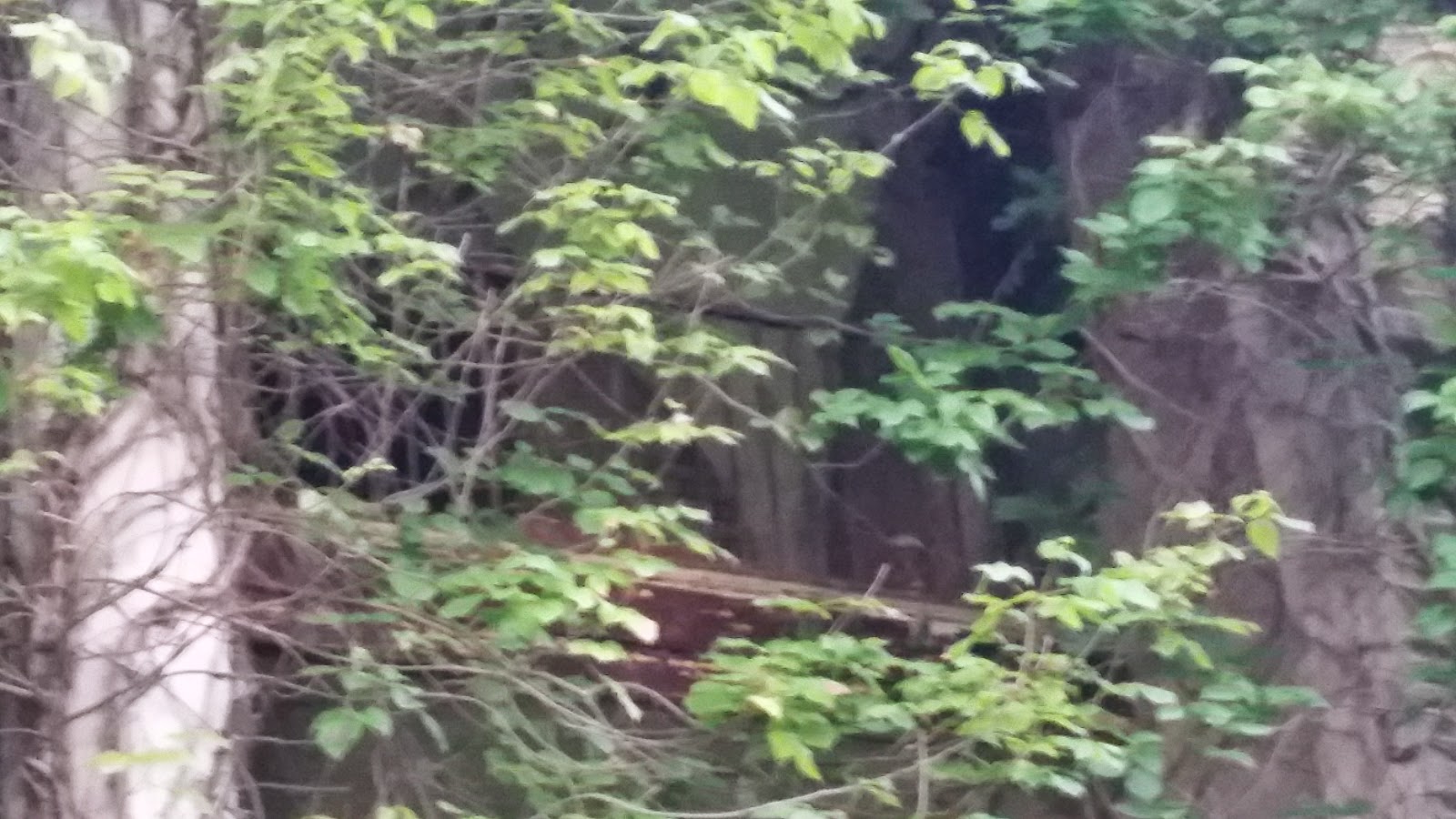 A park ranger has now been assigned to walk the beat around the premises as many teenagers have been reported to have been sneaking in through the windows and venturing throughout the interior. If you search YouTube you can find a few of these boys incriminating themselves. The ranger we met was really cool and he made a lot of small talk with us just to see if we were up to anything we shouldn’t be. He saw my voice recorder, but didn’t mind us using it. We have that conversation recorded on the EVR. He is now submitted evidence. 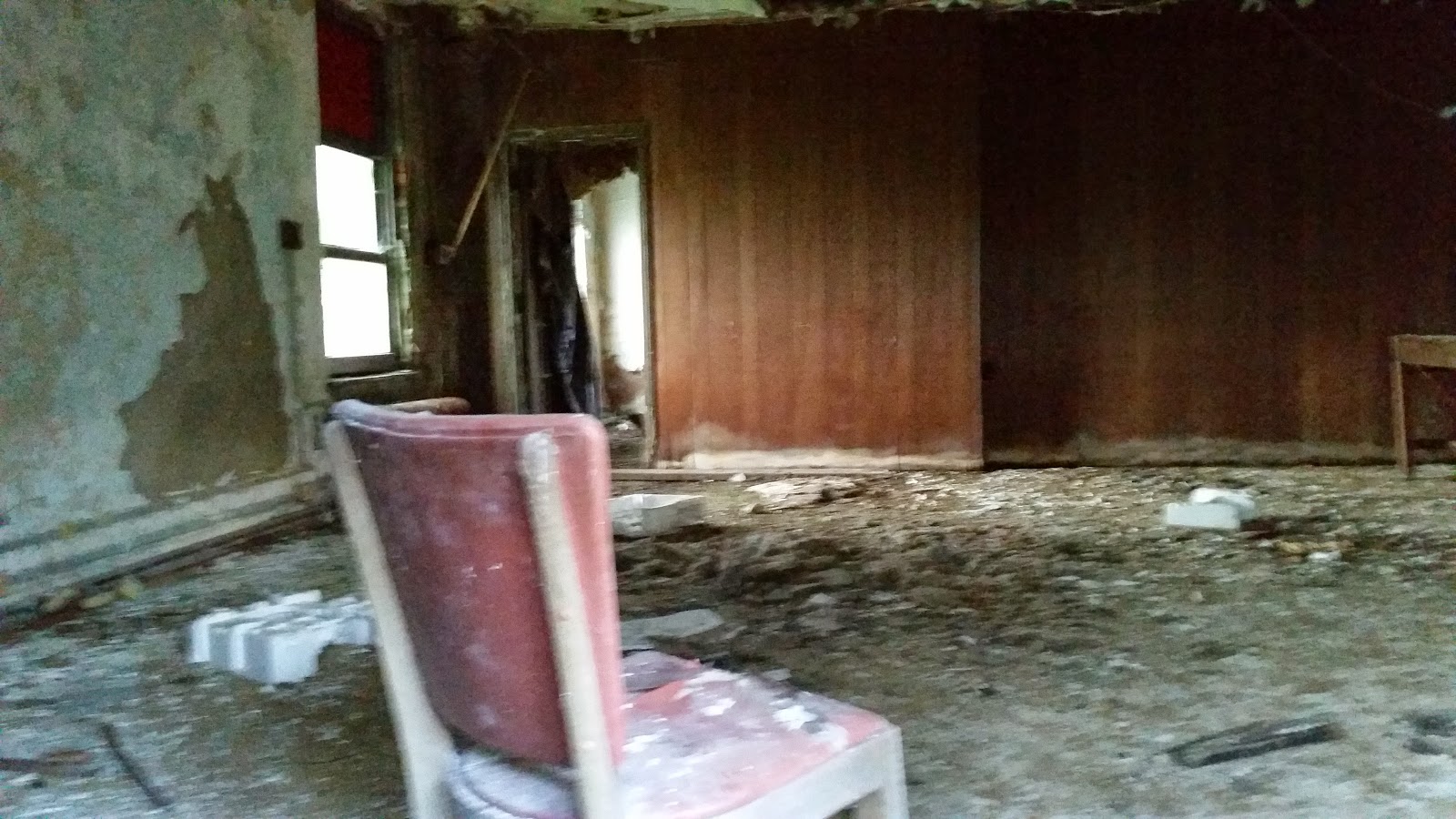 While walking around the perimeter we took several photos of the balconies, windows, and doorways where we had captured orbs before. This time around we didn’t catch anything. But, when the park ranger wasn’t in our immediate vicinity, we did pull back a couple of the plywood boards and did some quick shots. Here we did capture a couple of things we are not sure how to debunk, if they can be debunked at all. 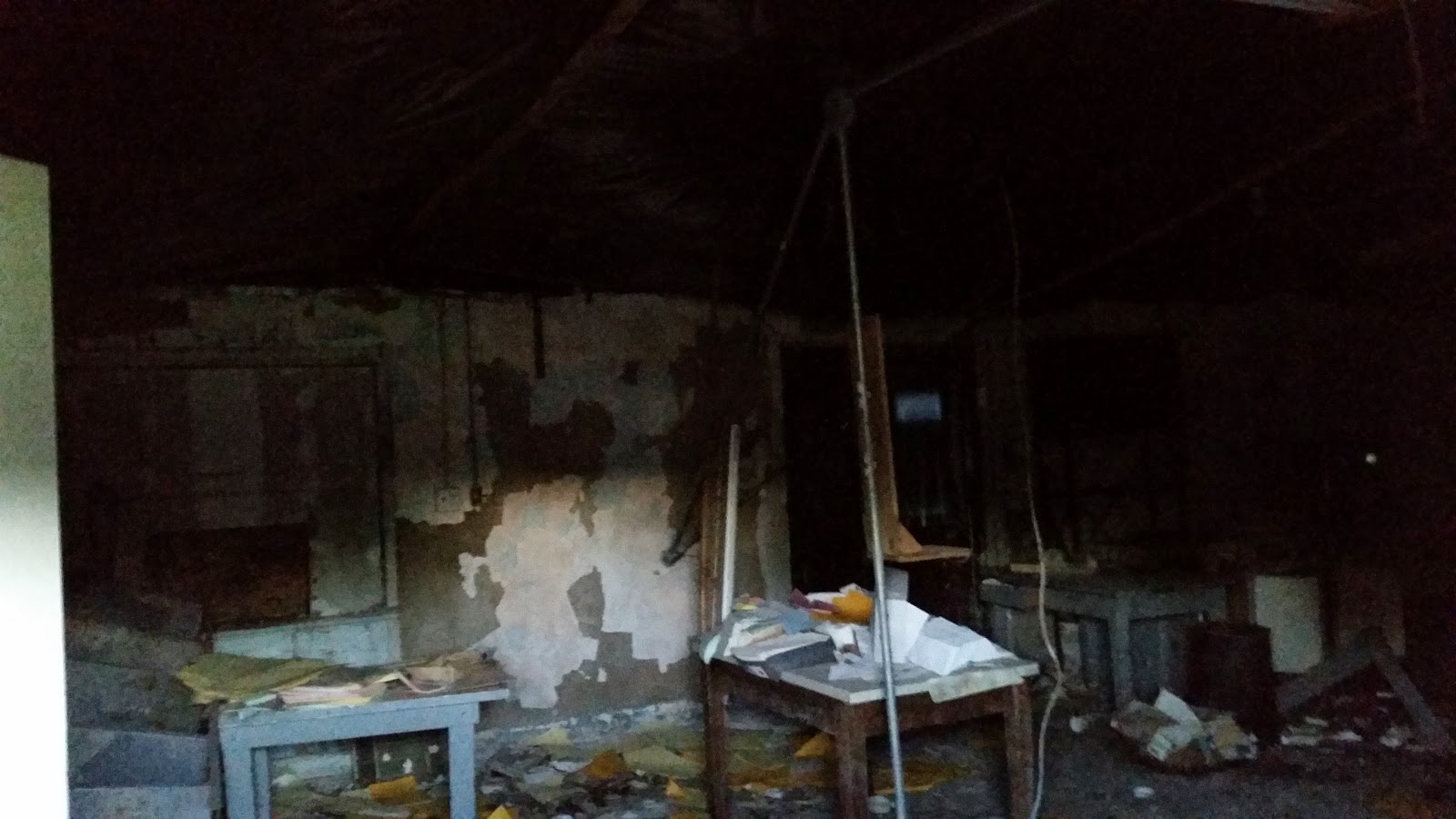 In our first photo you can see a white ball of light on the right and in the middle of the picture. We shot several photos of this spot and the light showed up on all of them but one. We tried hard to see if there was an object that light could be reflecting off of, but we couldn’t ascertain anything in that spot. The room is full of a lot of stuff, so this might be debunked as not being paranormal. 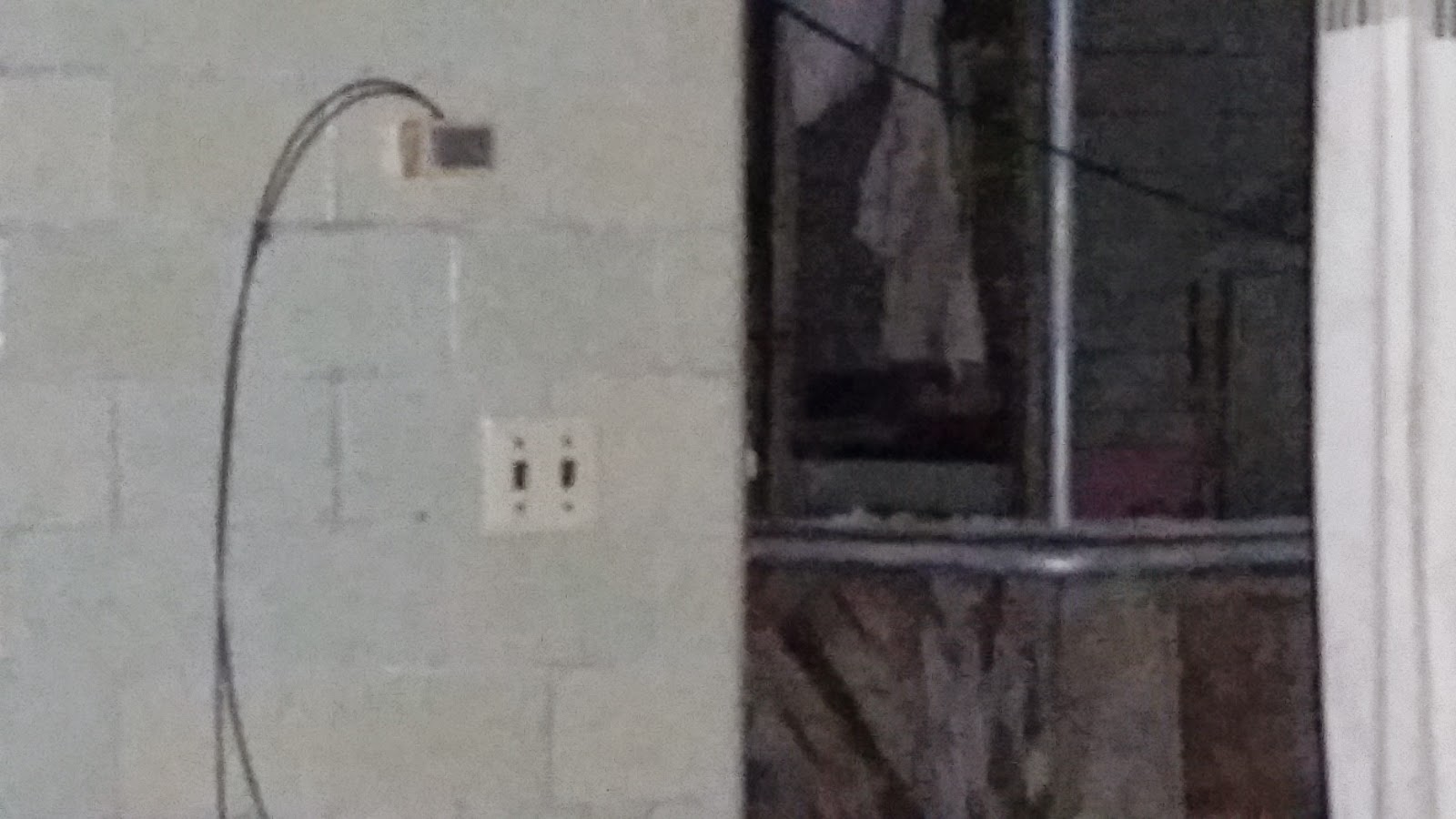 We did capture something, though, that we cannot debunk. You will notice in the picture above that the area looks like a shower-type area. There’s nothing in the way of the paranormal to be seen. It’s just a cluttered room. 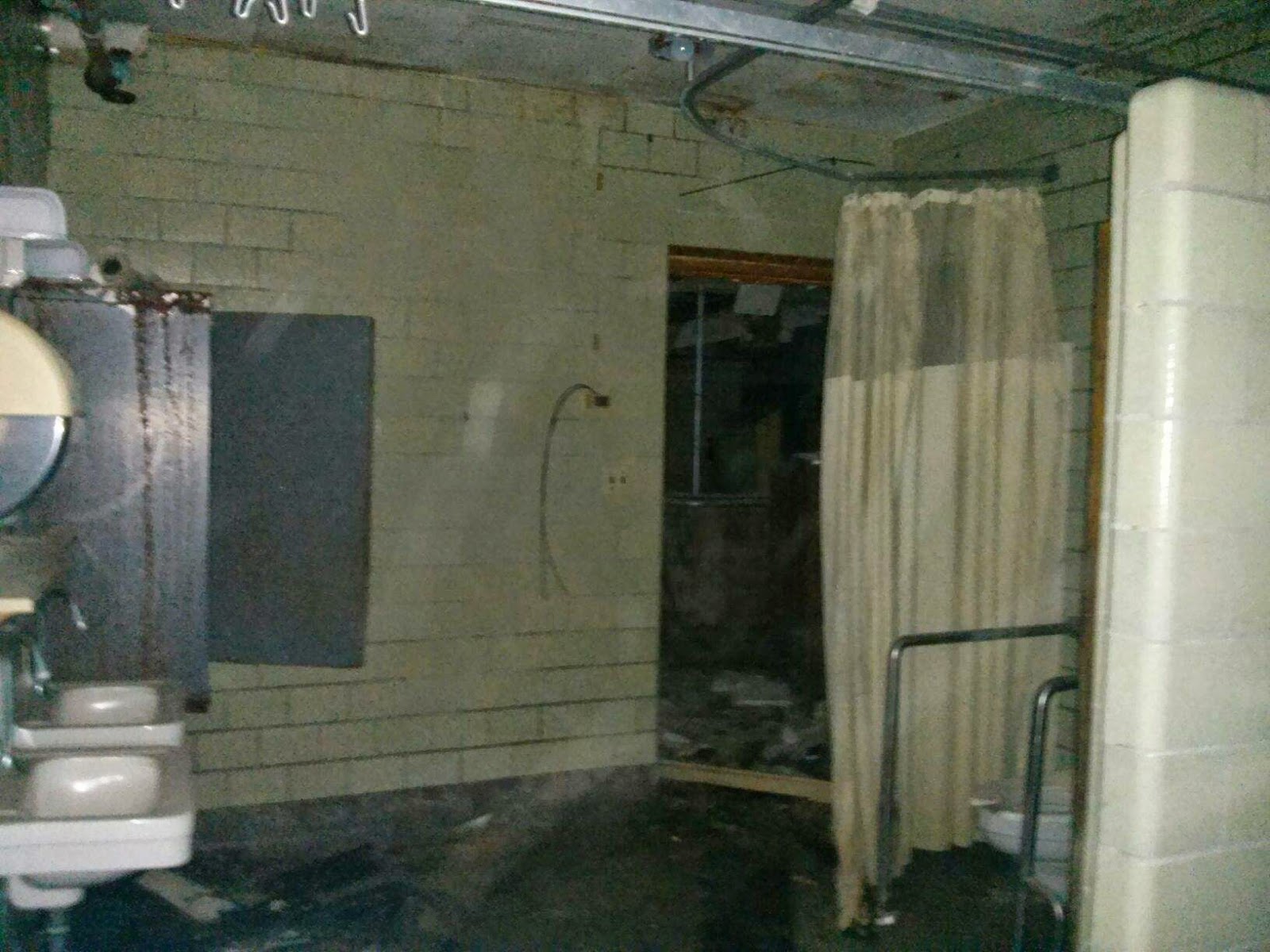 This next photo was taken by my nephew using his cell phone camera to shoot the exact same spot I just shot with a digital camera. Although this picture is not anywhere as clear as the one on his phone, there is a green mist present in the doorway. This next photo is a close-up of the area, again without any sign of an anomaly. 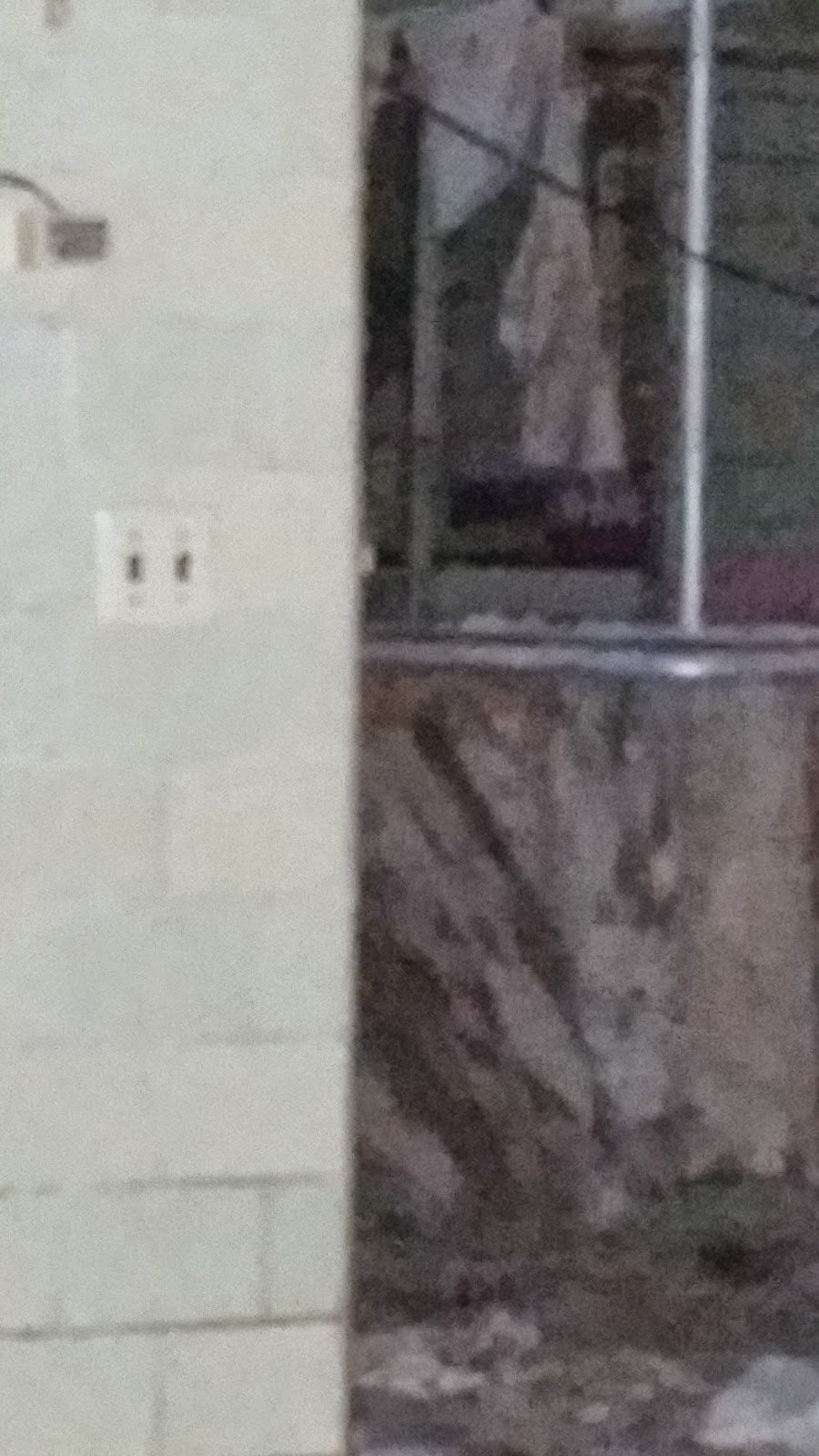 This green mist we believe is the clear sign of something in the doorway attempting to manifest itself for us. Prior to these photos we had placed the EVR inside and were asking several questions without any response. Perhaps the entity was choosing a visual response over an auditory one. Another thing you will notice about my nephew’s photo is that there is some visible white streaking. There wasn’t any glass on the window, so a reflection is out of the question. After doing some research, I have found that this shows up in photos as the spiritual veil which separates the physical and supernatural worlds. So, in essence, his photo gave us a two-fold capture – one of an entity attempting to manifest and the other is a rare view of the invisible barrier that separates the dead from the living.
Concluding Thoughts
Once again Molly Stark Hospital has not let us down as very active. It is rather unusual for a site to consistently yield activity, but this one has been the exception. In our brief amount of time here, we were able to capture more evidence that simply puts the nail in the coffin, so to say, that this location is haunted. We do not believe there are any malevolent entities on the grounds, just perhaps some of them may be a bit intimidating. Life in a tuberculosis hospital would have been a combination of fresh air therapy mixed in with chaos and misery. The patients would have carried those energies with them when they crossed over the spiritual veil.
I do wonder if my great-great aunt and her son, patients at the hospital in its earlier existence, still walk in and throughout the Molly Stark property. I would like to think that their souls are content and happy. The state of Ohio purchased the site for one dollar and they are planning to redevelop it into Molly Stark Park. The buildings are slated to be torn down, but perhaps the beauty of a new vibrant landscape will allow all the souls here to finally rest in peace.

Posted by Brian Moreland at 8:00 AM 2 comments: