Hanging Out with a Famous Corpse


Life can be eerie sometimes. Back when I was in college and just starting to write fiction, I studied screenwriting at the University of Texas. One of my assignments was to write a 30-page screenplay for any television show I chose. At the time, Tales from the Crypt was airing every week on HBO and, since I've always been drawn to write horror, I chose to write an episode for Tales from the Crypt. If you've ever watched the show, you might remember the old corpse who hosted the show - the Crypt Keeper - used to say really bad puns like "Hello, boys and gouls" and "So glad you could drop in, kill-seekers! Don't worry about me, it only hearse when I laugh!" 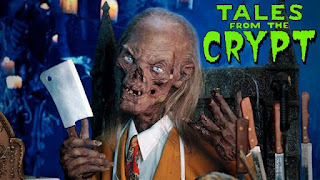 Well, even with all the corny quotes from the Crypt Keeper, I loved the show for it horrific plots, campyness and creepy episodes that always ended with a twist that was punctuated by the host's sinister laughter. It was just good scary fun. So for my assignment, I wrote a TFTC episode called "The Refuge." Set in WWII Germany, it was about four U.S. soldiers running for their lives after their platoon had just been slaughtered by something in the foggy woods. They take refuge in an abandoned church and discover some Occult-obsessed Nazis have unleashed something evil into the war.


My professor loved my script and gave me an A. I later attempted to submit my screenplay to HBO, but never found the proper person to send it to. And then the show got cancelled. I eventually expanded my WWII horror story into my first novel, Shadows in the Mist.

Ironically, the first weekend of May 2013, I attended the Texas Frightmare Weekend horror convention in Dallas, Texas and did a book signing at the FEARnet.com booth. And guess who happened to be sitting beside me to pose for photos with all the boys and ghouls? The Crypt Keeper himself. It was an honor to autograph my books right alongside him. One of them was the WWII story he originally inspired. 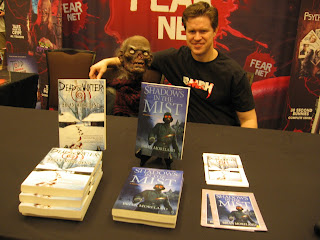 Funny how events in life can circle back around years later. I had a blast hanging out with my favorite corpse that day. He was just as charming in person as he was on TV. As the Crypt Keeper would say, "Now, that's INTERRORTAINMENT!"