Today’s guest post is by Hunter Shea, one of the rising stars in the field of horror fiction. He’s written several great novels and novellas that every horror fan must read. If you like fun stories with scary monsters and creepy ghosts, I highly recommend you check out the books of Hunter Shea. Here, he’s talking about his latest thriller, The Montauk Monster, which just released in time for the summer. 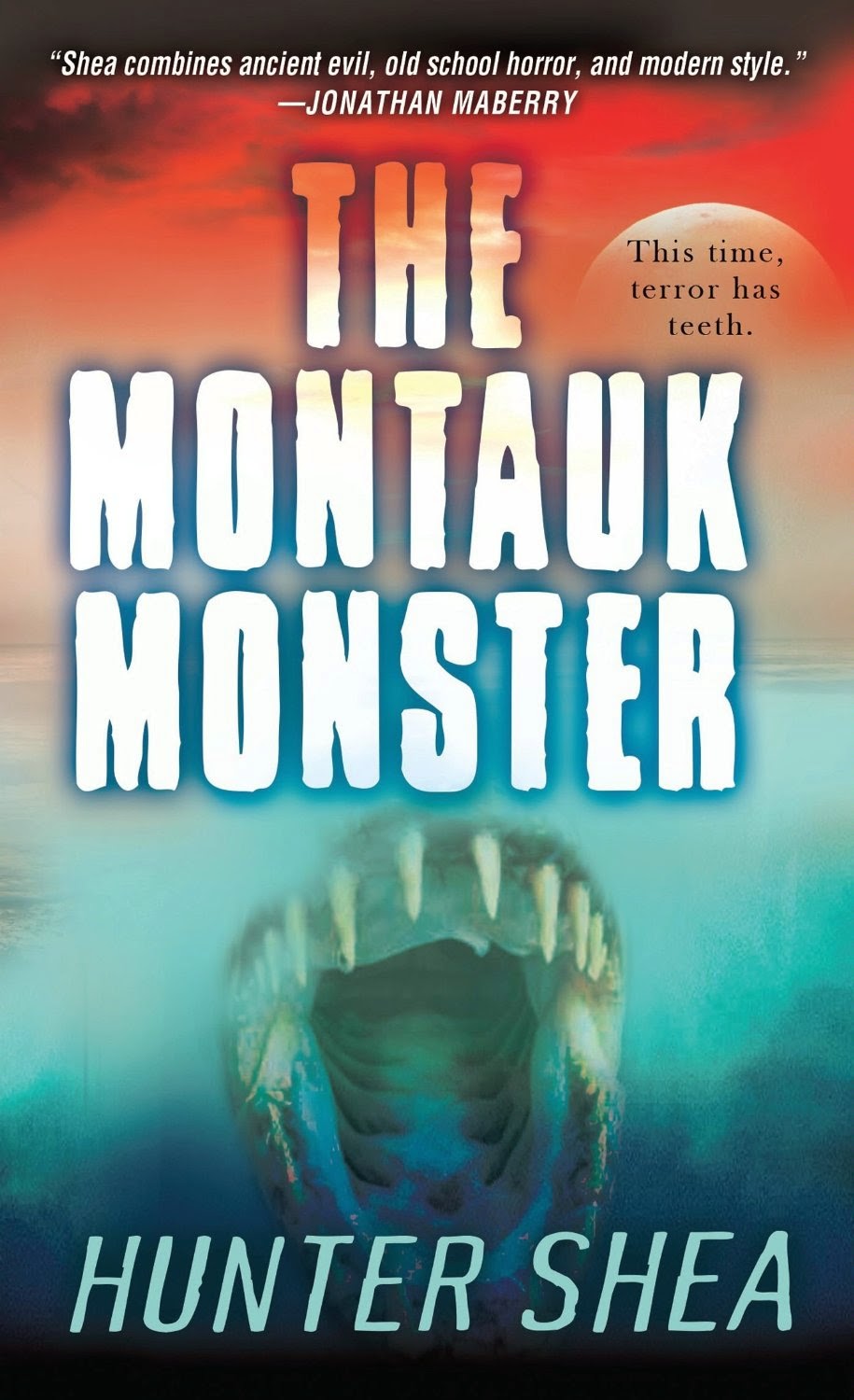 Have you heard the one about the Everglades skunk apes who got a writer a two-book thriller deal?

Sounds insane, right? Even more so because it’s true.

My debut thriller, The Montauk Monster, came about as strangely as the cryptids that descend on a Long Island town in the book. It’s funny how one set of creatures led to a breakneck tale of another.

Here’s how it went down and how you just never know where life will take you. A couple of years ago, I was watching a marathon of the show Bar Rescue. My editor at Samhain, the legendary Don D’Auria, emailed me around midnight to ask if I had any novellas I’d like to publish. Of course, I didn’t, but in a flash I had this idea about a Bigfoot novel set in the Everglades. Yeah, Bar Rescue marathons and lack of sleep make for great creative inspiration. Don said to go for it, and I set to writing.

A month later, I turned in my manuscript, Swamp Monster Massacre, a love note to the B monster movies I loved and still adore. SMM is filled with a family of angry skunk apes intent on murdering a band of hapless humans who crashed their airboat in the deep of the Everglades. The book is a hell of a lot of twisted fun and has been my most popular to date.

Flash forward to the following year. I get an email from a guy who says he’s an editor. Apparently, he was trolling for ‘new talent’ and had loaded up his kindle with hundreds of ebooks. When all was said and done, he said SMM was the one that stood out and he wanted to know if I’d be interested in working with him.

Now, at first, I thought this was some kind of scam. So, I checked him and his company out. Oh, he was legit all right. I replied that I was interested, and we got to talking. The man made me laugh and we found out we shared the same love for Roger Corman, Irwin Allen and loads of other stuff. Again, I was asked if I had any ideas for a thriller.

I had recently been looking at pictures of supposed Montauk Monsters, strange animal carcasses that have been washing up on the shores of Long Island, NY. I quickly hashed a story concept together. To my amazement, he loved it and we were off to the races. To convince the senior editors in the project, he even printed pictures of the corpses and articles! And sure enough, I not only got the deal, but a two-book deal.

Right away, I started working on the book, powering through it, creating non-stop action with plausible backstories. It was a challenge and a thrill. Best of all, the whole thing was an unexpected gift from above.

Now here it is, already listed as Publisher Weekly’s top reads for summer and in a second printing before the first copy hit the shelves.

And it’s all because of those lovable, murderous skunk apes. Who knew? As R.L. Stine told me (along with the crowd of other writers who paid to hear him), never say no. That proposal you take on could be the one that changes your life. 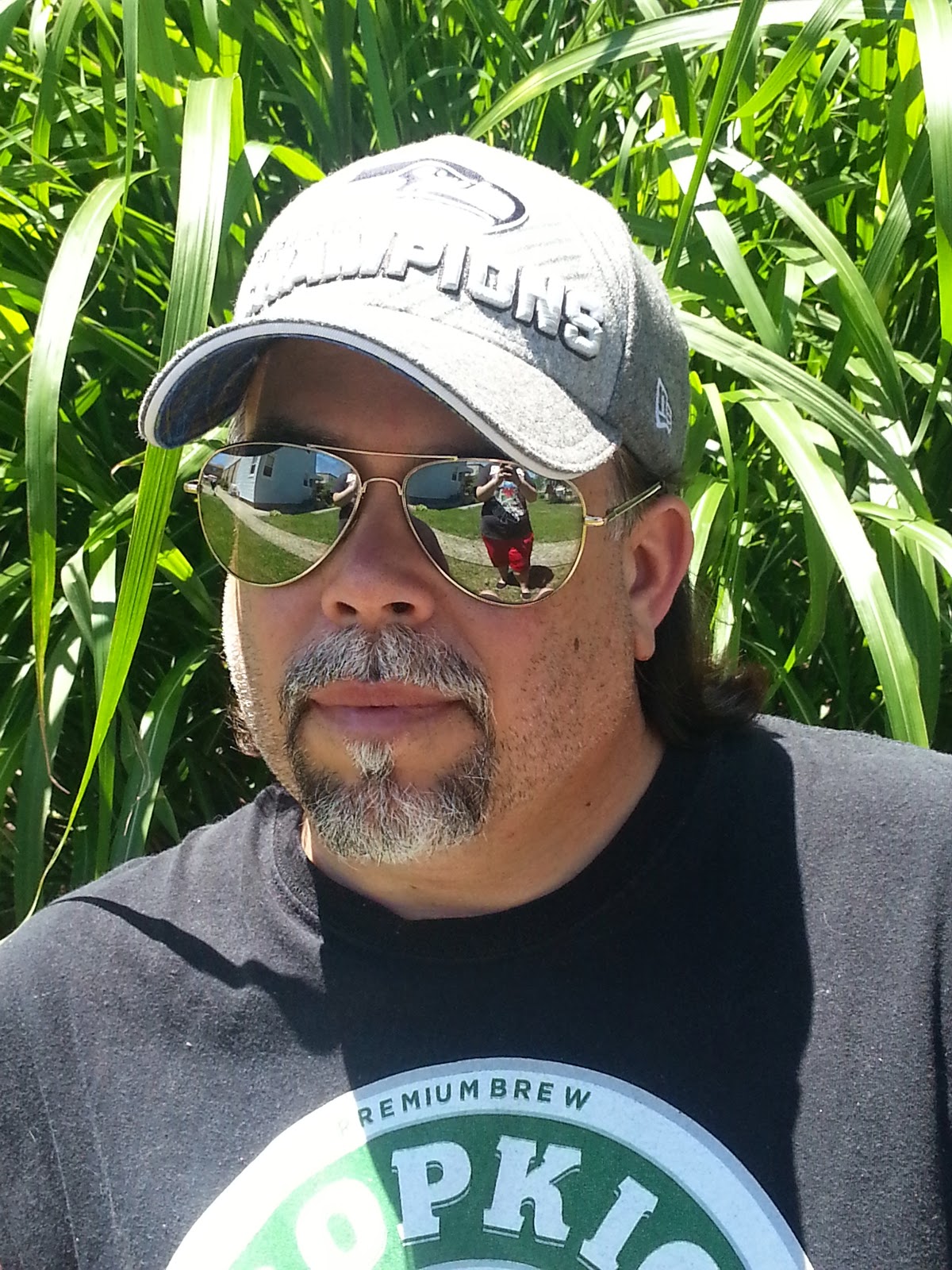 Hunter Shea is the author of the pulse-pounding new thriller, The Montauk Monster, named as one of the Best Reads of Summer by Publishers Weekly. 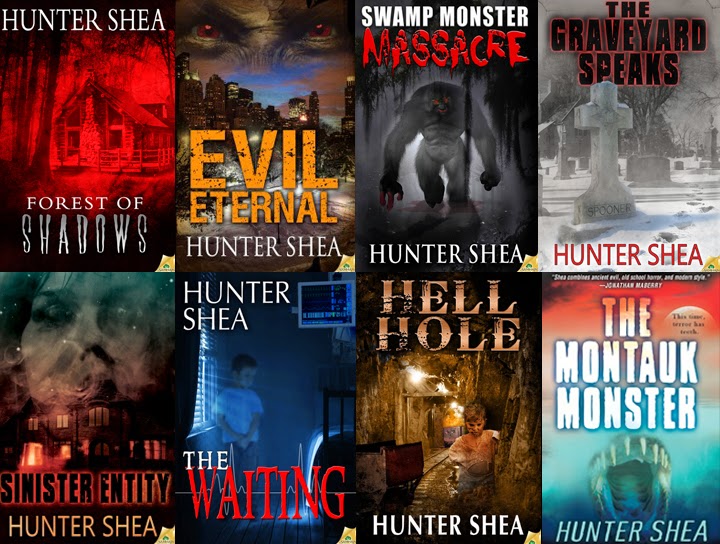 His horror novels to date are: The Waiting, Sinister Entity, Swamp Monster Massacre, Evil Eternal and Forest of Shadows. His obsession with all things horrific has led him to real life exploration of the paranormal, interviews with exorcists and other things that would keep most people awake with the lights on. Hunter is also the proud and slightly demented co-host of the Monster Men video podcast. A native New Yorker all his life, he waits with Biblical patience for the Mets to win a World Series. You can read about his latest travails, preview and purchase his books, watch Monster Men episodes and communicate with him without the need for a Ouija board at www.huntershea.com.
Posted by Brian Moreland at 11:45 AM 2 comments: 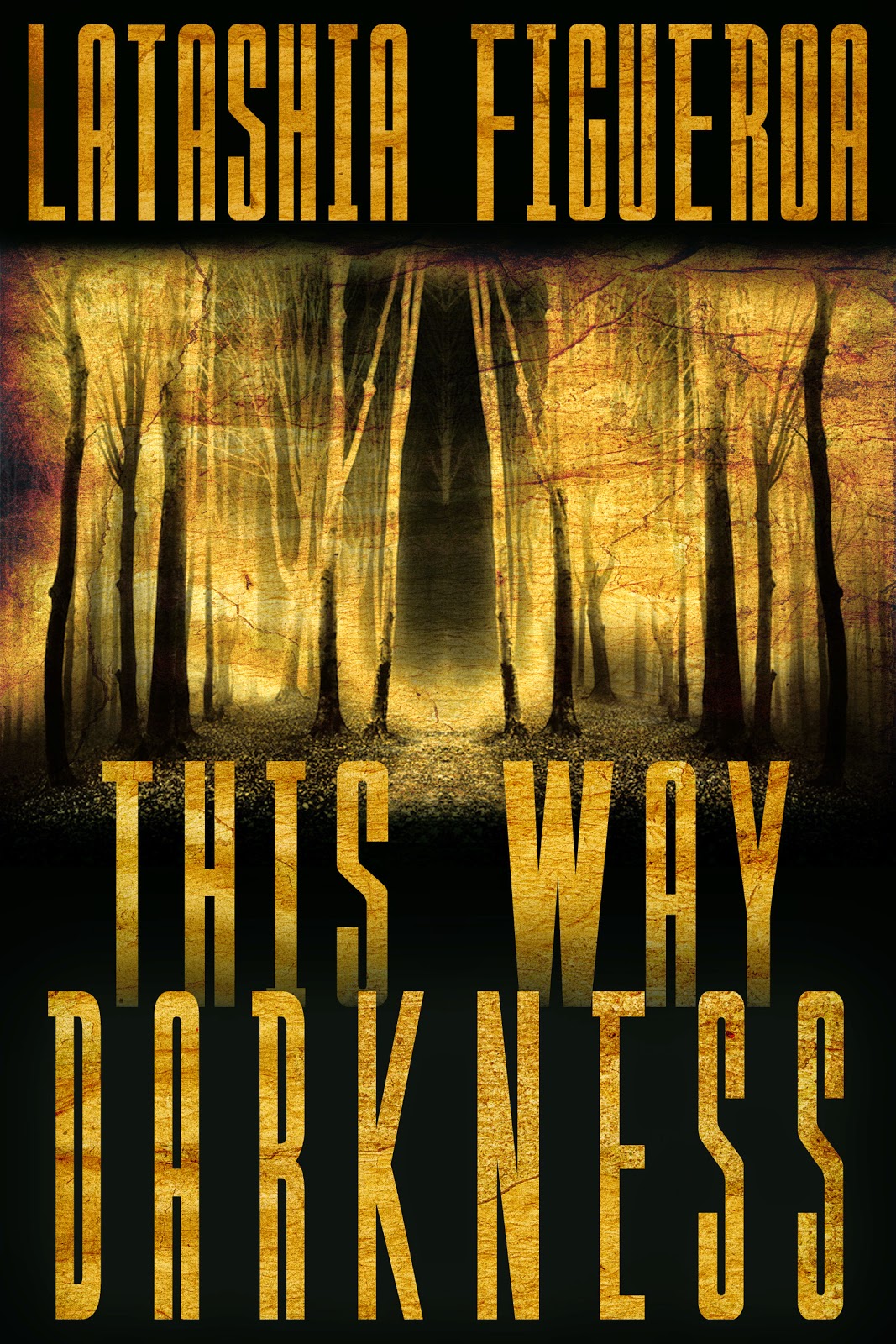 I was told not to go down that road many times, and the warning only heightened my curiosity.  The darkness that lurked behind the trees even at high noon seemed to beckon.  Today, I went just a little bit further than yesterday, beyond the trees. The hairs on my neck erected, my heart didn’t just beat, it pounded. And then I turned my car around and drove away.

There is always a thrill when we do those things we know we’re not supposed to; a jolt of satisfaction.  Ignoring the voice that whispers “No” gives most of us a strange pleasure.

Do we act on those impulses or do we leave them where they stand?
You say you really don’t want to go out alone with the stranger you met on the Internet and yet deep down you do.

“If I kill her, all my problems will go away,” you chuckle at the thought.  After all, you are not capable of such a violent act. Then, who planted the thought in your head?

I don’t really believe there are psycho cannibals living beyond the trees in the woods. Yet there’s a part of me that’s hoping there’s something out there.

These are the stories that intrigue me, that hold me captive. And they are the stories I like to write; leaving the reader to ponder on the consequences of making that wrong turn.

I plan on driving past that TURN BACK sign tomorrow. I plan on seeing what’s behind the thick of the trees. Perhaps a monster lies in the obscurity. I will let you know what I find. And if I don’t, you’ll know that I did find danger, that it was indeed the wrong way. You’ll know that I am unable to turn back. 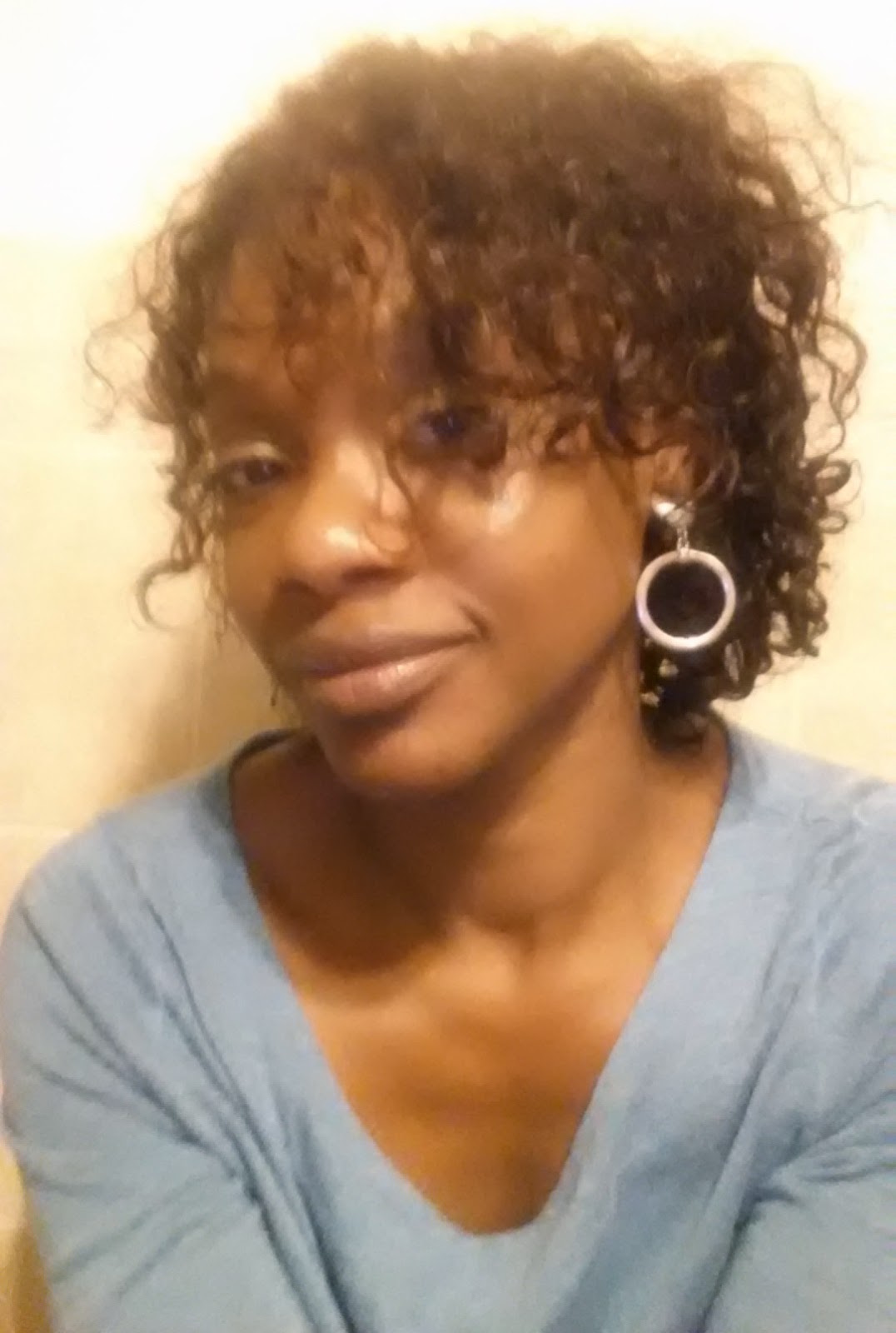 Posted by Brian Moreland at 11:45 AM No comments: