Is the Molly Stark Hospital in Ohio Truly Haunted?


Today’s guest author is Timothy Yohe, a ghost tracker who writes for The Paranormal Blog. He shares a fascinating ghost story and some creepy photos of a haunted hospital in Ohio.

Is the Molly Stark Hospital in Ohio Truly Haunted?
An Investigation and Conclusions: 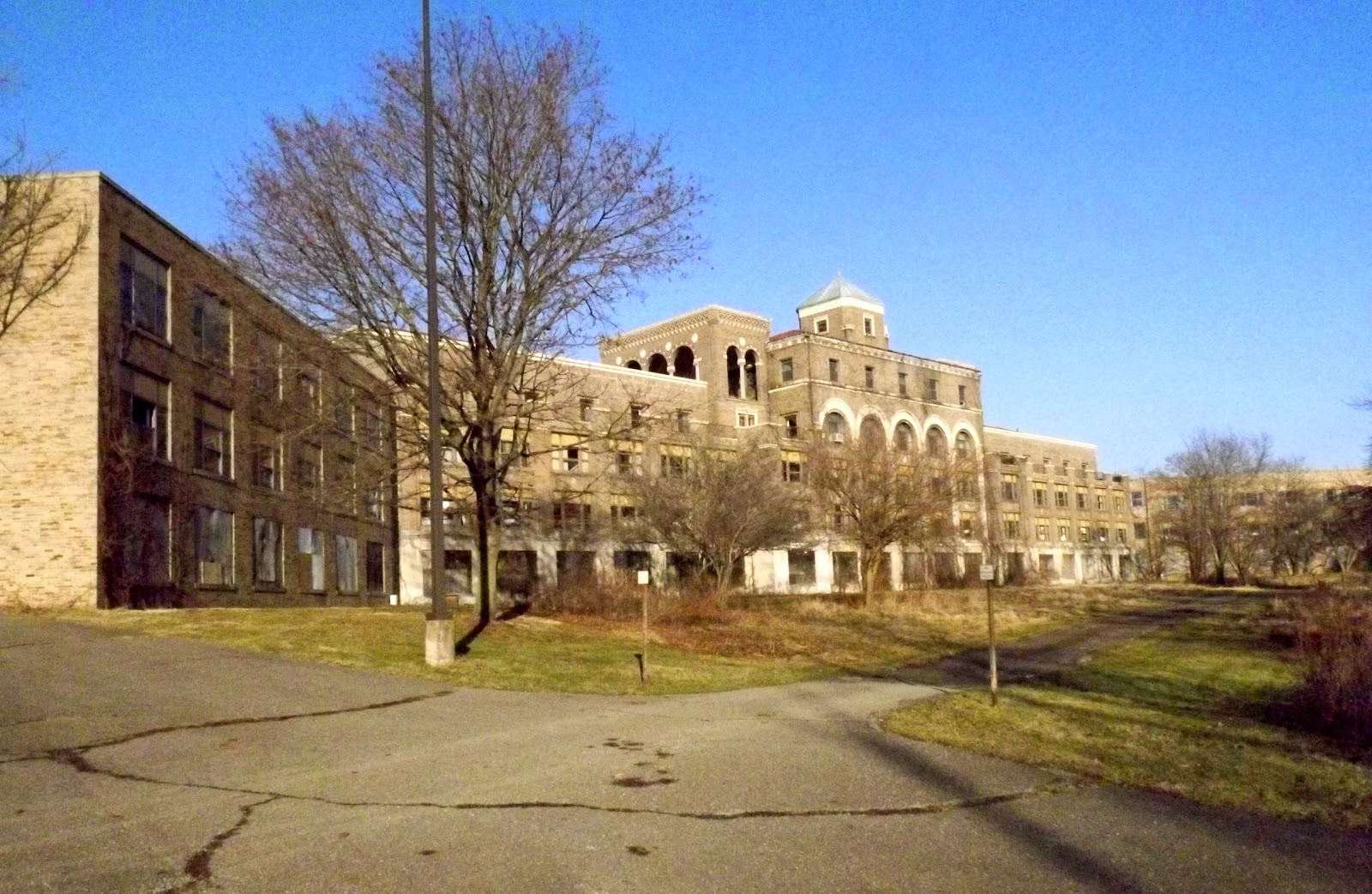 Anyone travelling down Ravenna Road on the outskirts of East Canton, Ohio in Nimishillen Township will see a landscape that resembles many of the small towns which are interspersed throughout the state. A large percentage of these towns have stories about spirit activity and unexplained phenomena which occur within their rural boundaries. Limaville is no exception. It is an area filled with small rolling hills and houses built for practicality, many erected around the turn of the 20th century. But through the skeletal trees and down a dusty road lies the questionably haunted grounds of the Molly Stark Sanatorium.

A Walk Down Memory Lane 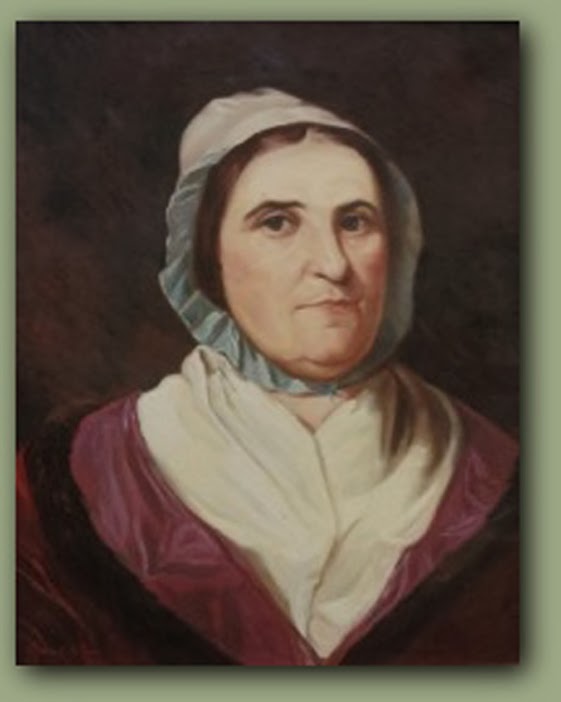 The hospital received its name from Elizabeth “Molly” Page, the wife of a Revolutionary War soldier named John Stark. Stark was one of George Washington’s generals known for his incredible insight and mastery of the battlefield. Molly, born in 1737 in Haverhill, Massachusetts, married John in 1758, and together they had 11 children. In Dunbarton County, during John’s war years, Molly opened up her already crowded home to take care of soldiers suffering from small pox and other ailments. It was during this period that she became well-known for her nursing efforts whose noble efforts travelled by word of mouth with many of the troops she had cared for in her home. A group of these soldiers eventually migrated into the Ohio area. It is through them, in honor of the Stark family, where Stark County derives its name and where a tubercular hospital was built in her honor (womenhistoryblog.com).

“On August 23, 1929, Molly Stark Sanatorium opened its doors to the public, providing care to residents…suffering from tuberculosis.” The hospital was designed with balconies, verandahs, and lots of windows to offer its patients plenty of fresh air and ample sunshine, the then believed treatment for their illness. The worse off patients were kept on the second floor with the more mobile ones on the first floor, allowing them access to the grounds filled with nature. “In 1938, the Works Progress Administration installed nearly 1,200 linear feet of tunnels at the sanatorium”, which were meant to house the utility infrastructure, but also became a means of travel underground between buildings. Also, in 1956 and until 1995, the Molly Stark became a hospital for other illnesses. The patients who were admitted here were the mentally ill, those with drug and alcohol abuse and the elderly. Our investigation was organized to focus on each of the three floors.

Cruising out to Molly Stark with my brother-in-law stirred up conversation between us on the rumors of incidents which some folks have claimed occurred at the site. Although these incidents have not been documented or verified by experts, the stories range from the physical presence of former patients looking out of the windows, orbs of light appearing mostly on the second floor, and voices heard echoing down the hallways and utility shafts. The hospital has never had any formal tours conducted on its grounds throughout its entire history, so any investigators were folks simply showing up and performing their own public investigations. As we turned onto the loose gravel road leading to the Spanish-style architecture building, I loaded my digital camera with the plan to start shooting many photos of the outside perimeter in the hopes of capturing the faces of patients I had heard could be staring out at us. 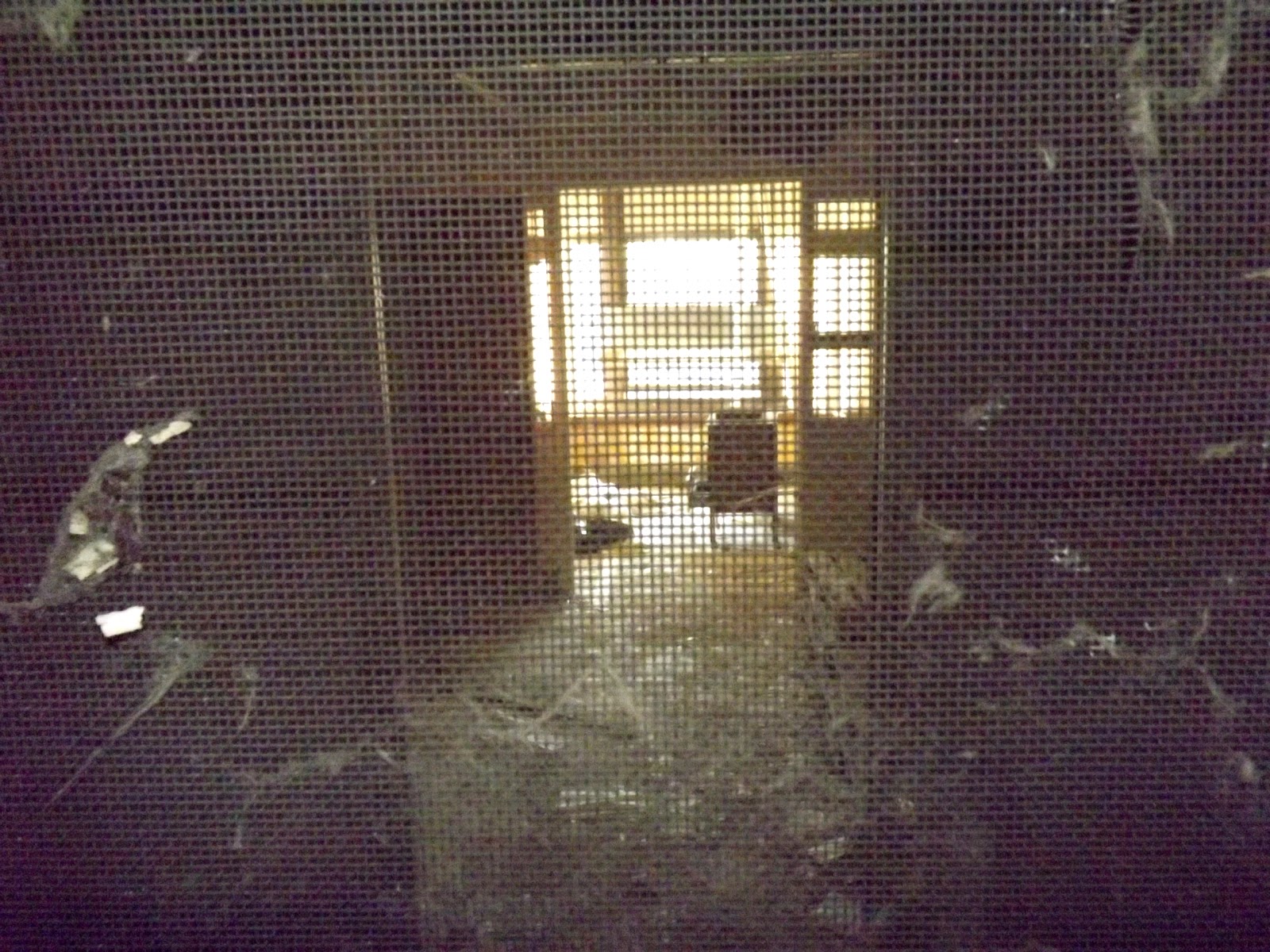 Since Molly Stark Sanatorium was built with many windows, there were lots of opportunities to capture possible apparitions. After reviewing the many photos taken we were able to set aside a few questionable ones, which appeared to reveal faces and upper bodies. Most of them we were able to debunk as either objects inside the room, smears or physical contamination on the window, or abstract lighting. The one we earmarked was done so because we were able to rule out these variables with this apparent apparition and still could not explain the figure to be anything other than someone peering out the window at us. It was indeed an exciting moment! 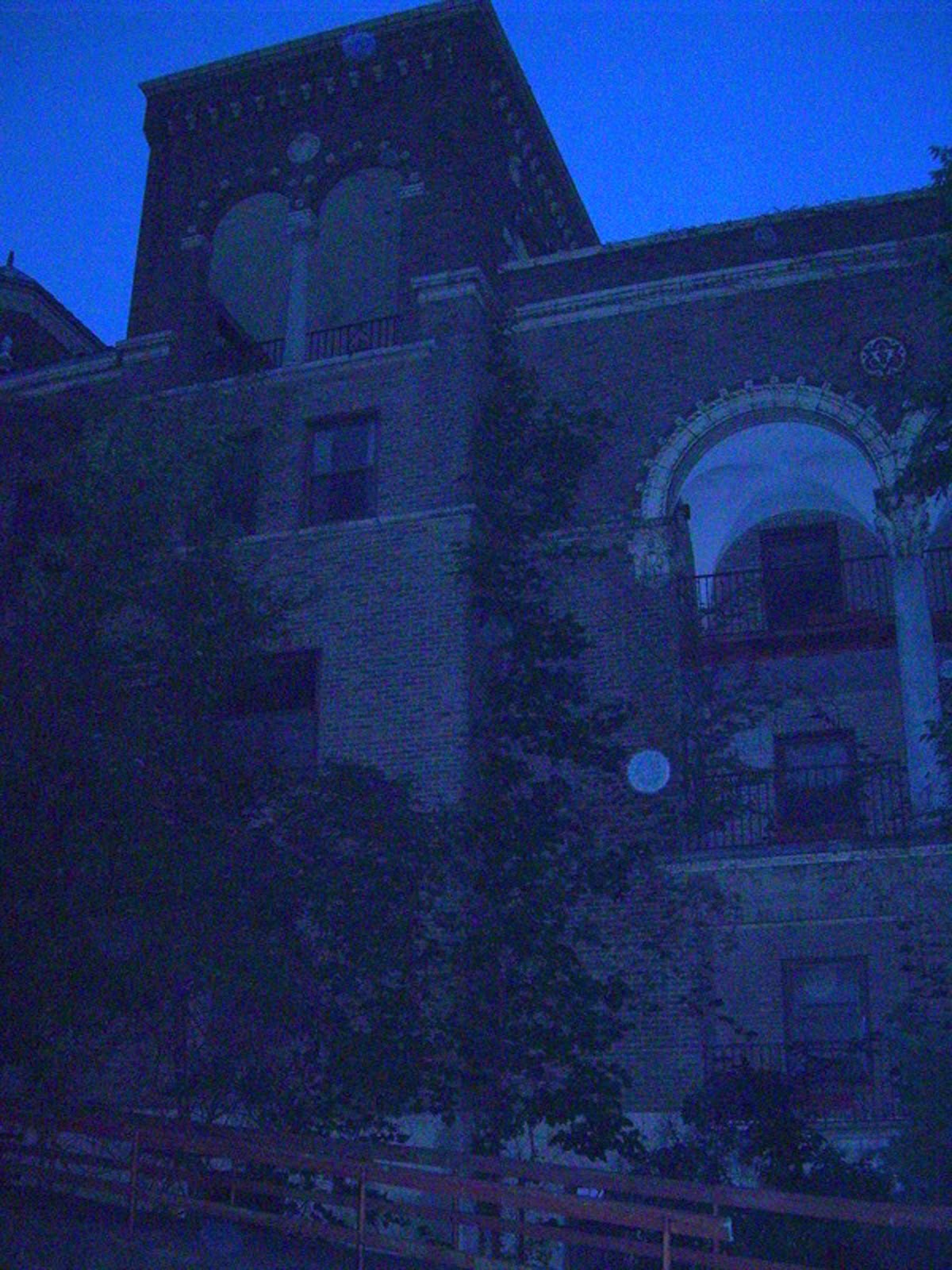 Photos of the balconies and verandahs generally revealed nothing except for one shot of the far left archway on the front of the hospital closer to the east wing. In our original photo an orb was revealed in the darker area at the top just to the left of the keystone (the photo below is a current picture used for comparison). 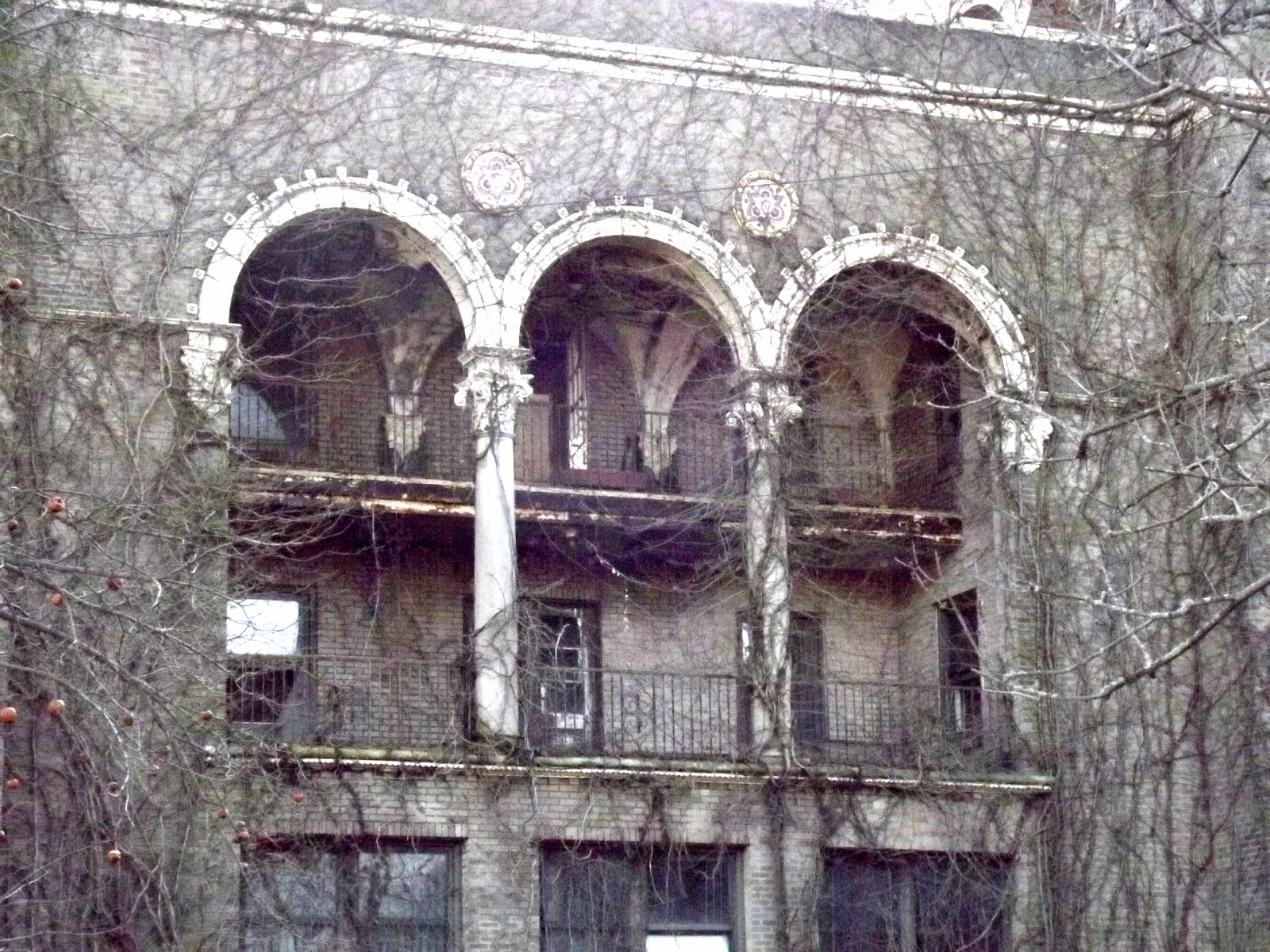 The darker photo shown above is from another photographer shooting the same area, and ironically you can see an area of the wall which appears to reveal an orb. There is no architectural structure in this spot – so draw your own conclusions. It does seem that Molly Stark is very consistent with light anomalies in its balconies and verandahs, just as we had heard rumored. It may very well be that these bursts of energy originate from patients who died at the hospital, as they would have been housed on the second floor.

What’s That Sound?
During our investigation of the end wall of the east wing we discovered a large hole which looked like a ventilation shaft, fitted with a domed cover. Two members of our team, one female and one male, took turns speaking loudly into the vent. After several attempts we were able to discern 2 responses coming from within the shaft. One response sounded like a “yes” when the question was asked, “Is there anyone there?” The other response sounded like an airy grunt when asked, “What is your name?” We did not carry any sound recording devices with us, so these voices are undocumented personal experiences. At this point we were convinced that Molly Stark Sanatorium is quite active and so I began a search for an entrance into the complex. 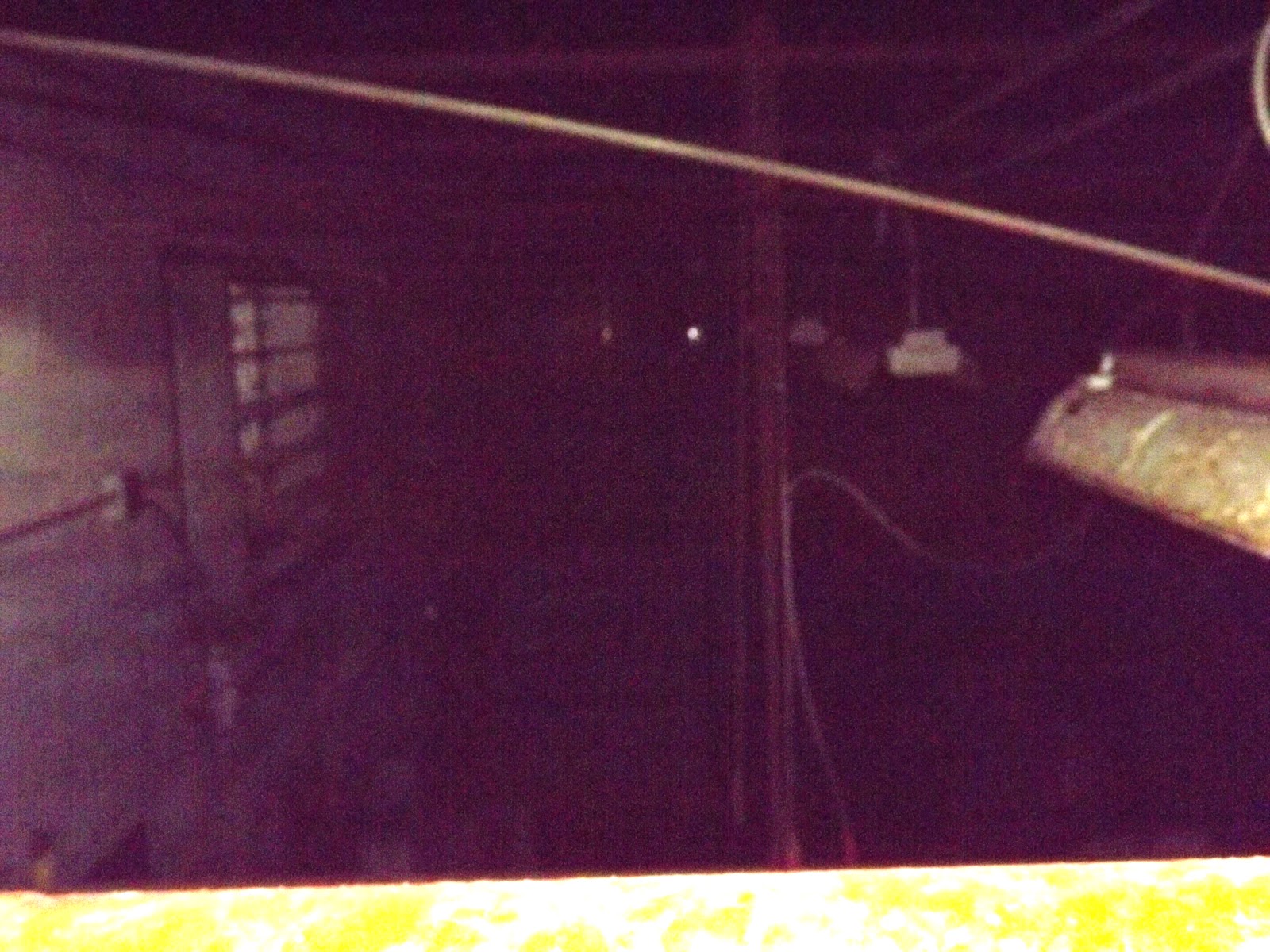 After walking down the back side of the east wing, we came to a juncture where the west wing began. Here there was a window which appeared to have been completely removed and hadn’t been boarded up like all the other ground level entrances. I climbed into a very small room which looked more like it had been used for storage purposes when the hospital had been open. The single door out led me into a hallway filled with debris along with odds and ends furniture. Although the lighting was dimmer in the building, I could still clearly see the elevator doors off to the left, which made the hairs on my arms stand up. As I continued shooting photos while walking down the hallway, I began to hear faint movement on the steps just down near the end. The closer I got to those steps the more intense the alarms starting going off in my head that there was more than one entity approaching. I have always been sensitive to paranormal activity and so I used this as another tool of investigation. And at this point my instincts screamed at me to get out! And so I did very quickly.

The investigation of Molly Stark Sanatorium proved to be more active than we expected. All of the rumors I had heard throughout my childhood turned out to be generally true. We do not believe that any of the figures or entities seen or felt in this hospital are of a malevolent nature. After all, Molly herself was a wonderfully caring person and it would certainly seem that the sanatorium named after her followed suit in nature. “[In] April of 2009…the old Molly Stark property [was] [p]urchased from the Stark County Commissioners for the sum of one dollar” and has been made into a county park. The building is set for demolition sometime in the near future. I only wish that any souls trapped within this hospital could be freed to move on. But then again, what nicer place could one roam - filled with sunshine, fresh air, and a deep rooted history!

Hello! I am an aspiring writer who is in the midst of making a mid-life career change. Although I love to express my culinary talents, I have an even greater passion to teach our youth. I have a deep fascination with the pioneering field of the paranormal and the influx of science to explain the visible and invisible worlds. When I’m not working or writing, I am an active family man, enjoy cycling and hiking through nature, and sipping a glass of cabernet with my wife. My future goals are writing blogs, short stories, books, and novels along with living a simple, non-materialistic life
For more true paranormal stories, check out Timothy Yohe’s Paranormal blog: ghosttracker423.blogspot.com
Posted by Brian Moreland at 1:57 PM