Researching SHADOWS IN THE MIST

Up to this point I had never done any WWII research. In fact, most of my knowledge had been through watching war movies. But I knew that if I was going to write a WWII-based novel and eventually publish it, it had to be factual. So I spent a good three years reading history books and articles on the Internet. I watched documentaries and movies to have a greater understanding of why we were fighting this war. I learned about weapons and war strategy and about the underground forces that assisted the Allies in sabotaging the Nazis.

I searched for a specific German forest for the story to take place. I found the perfect setting in the battle of the Hurtgen Forest (often spelled Huertgen). This took place in September - November, 1944 just prior to the Battle of the Bulge. The Hurtgen Battle is not discussed very much in history books, because it was a part of the war where the U.S. and British forces suffered a lot of casualties and gained little ground for months. I got really inspired by this painting from James Dietz called "The Huertgen Forest Patrol." 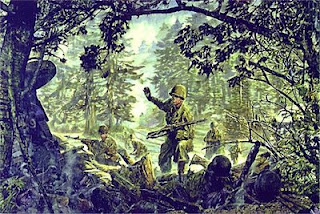 The Hurtgen Forest provided the best setting for my novel because it was always foggy and rainy. Infantry soldiers gave it nicknames like "The Meat Grinder" and "The Green Hell." It matched the setting I had created in my original short story. I saw the G.I. centered in the painting as my hero Lieutenant Jack Chambers leading his platoon into certain doom.

One of the biggest complaints of the G.I.'s who had to go into the fog-enshrouded forest was the mist was so thick they couldn't even see the Germans. This inspired me to change my title from "The Refuge" to SHADOWS IN THE MIST.

Even though this is a supernatural horror novel, I wanted it to ring true and for the reader to feel a sense of realism. I wanted it to feel like you as the reader are experiencing the war as if you were a soldier in the platoon, and you can hear the explosions and feel the bullets whizzing by. To know what this felt like, I interviewed retired veterans who fought in the Hurtgen Forest. I learned what they ate and how they slept and what fighting the Germans was really like for them. I even traveled to Germany for three weeks by myself, with nothing but a backpack, camera, and journal, and walk through the very woods where the battles happened. Even today, the woods are creepy. Here are a couple photos I took. 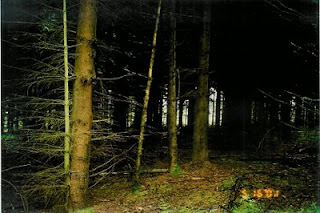 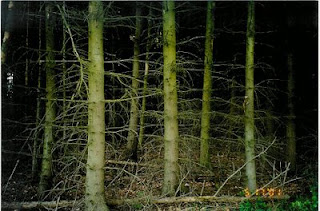 To learn more about this story and see photos visit this page on my website: http://brianmoreland.com/wwiiresearch/hürtgenforestgermany.html.

SHADOWS IN THE MIST is a cross-genre novel, combining military history, espionage, with supernatural horror. The supernatural aspect is actually based on historical facts about the Nazis and their fascination with the Occult. To read more on this visit this page on my website:
http://brianmoreland.com/wwiiresearch/nazioccultmysticism.html.

Because of all the research, it took me over four and a half years to complete the novel. But through the process, I discovered that researching a novel is just as much fun as writing one.
Posted by Brian Moreland at 2:22 PM