On Writing SHADOWS IN THE MIST

Looking back now at my days at the University of Texas, it was both my screenwriting classes and creative fiction writing classes that led me to writing SHADOWS IN THE MIST. The story started out as a short screenplay that I wrote for one of my assignments. It was originally titled "The Chapel." Our assignment was to write a script for our favorite TV show. Being such the horror fan, I chose to write an episode of Tales from the Crypt. 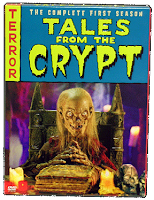 "The Chapel" was set in WWII Germany, in a foggy forest. Four U.S. infantry soldiers are running from something in the fog. They're shot up, dragging one of their buddies who has a wounded leg. They take refuge in an abandoned Catholic church that's just rotting away out in the forest. The four soldiers are frightened, confused, and screaming at one another. We learn quickly that their entire platoon was just slaughtered and something unearthly was chasing them through the woods. They explore the church's basement for a better hiding place and discover a Nazi bunker where the Nazis had been practicing the Occult. At that time, I knew very little about World War II and did zero research. I just wrote what I thought was a fun horror story, and for some reason, made WWII Germany the setting. I literally wrote this off the top of my head. I didn't know what the soldiers were running from until I got to the end of the story. I believe I got an "A" on my thirty-page screenplay. I thought about submitting it to the producers at Tales from the Crypt, but the show canceled soon after I finished.

I loved "The Chapel" screenplay, but didn't do anything with it while in college. I was more focused on writing a couple of novels, developing my craft. Because I changed majors midway through, it took me five and a half years to finish college. I finally graduated with a Bachelor's degree in Radio/TV/Film with a minor in English. While my friends were getting jobs that matched their majors, I looked at the career world and said, "Now what?" There was no firm out there ready to hire an aspiring novelist and pay a big salary, or even a small one for that matter. So I got into video editing, cutting together corporate videos, TV commercials, and documentaries. Did this for the next fifteen years. It paid the bills while I continued writing on the side. Video editing has actually helped my writing, because it taught me how to compose and edit a story, and think in terms of scenes. I also learned how to start and finish creative projects.

Okay, back to writing Shadows in the Mist. During my early twenties, I went through a period of writing short stories and poetry, as much as I could churn out. It was a very prolific time. I plan to share some of these early writings in a separate blog. That's one of my next projects, so be looking for it on my website http://www.brianmoreland.com/ in the blogs section.

So during my Renaissance period, I came across my script, "The Chapel" and dusted off the pages. It had just been sitting in a folder. I read through it and thought how it was one of my most inventive stories, and here I was doing nothing with it. As writers, we all have stories or poems that are just stored away, waiting to be read. I was really getting comfortable writing prose, so I decided it would be fun to re-write my WWII horror story in the format of a short story fiction. It was fairly easy, all I had to do was change the tense from present tense to past tense and put quotations around the dialogue. I changed the title, calling it "The Refuge." I added a little more depth to the soldier characters and the Nazi Occult mystery they were desperately trying to solve. I tried to submit "The Refuge" to a couple of magazines, including Playboy, but I couldn't get much interest in it. So back in the folder the short story went, and it was forgotten about for years.

I have to share that at this point in my writing career I was getting really discouraged. I wrote and re-wrote my first novel SKINNERS on and off for about eight years. I was doing everything I could to publish my first novel. Back then we didn't have the option of self-publishing, just the old fashioned way: submit your manuscript to a literary agent. The agent represents the author and shops the manuscript around the publishing houses up in New York. Problem was for the life of me I couldn't get a literary agent. That became my biggest barrier. I was waiting months and months and getting so many rejection letters before an agent would even read my manuscript. I was extremely frustrated and was just about to give up on this whole career of writing novels. I decided to just take a break from it all. I put SKINNERS on the shelf and stopped writing for awhile.

Then in the year 2000, nearly ten years after I wrote the original screenplay "The Chapel", a producer/screenwriter I was working with named Tim asked to read one of my short stories. I gave him the revised story, "The Refuge," and he loved it. Tim kept telling me it was such an original story and could easily be expanded into a full-length novel. Inspired, I read through my short story, trying to imagine how I could expand the story from thirty pages to four hundred. I asked myself questions, like what led the four soldiers to the abandoned Catholic church? Who were the Nazis they found dead down inside the bunker? I just kept thinking about the story, visualizing it in my head like a movie. Then one morning I got the inspiration I was looking for as my creative muse filled my mind with a vision of how the story could play out as a novel, and perhaps even a movie. I felt such a surge of excitement I started writing.

I added a dozen more characters. Instead of four soldiers, I now had a full platoon. I added depth to my platoon leader, Lieutenant Jack Chambers. I gave him some back story that explains how he earned the nickname, "The Grim Reaper." Every protagonist needs an antagonist, so I created Lieutenant Pierce Fallon, Jack Chambers's nemisis. The two fought together in a platoon unit in Africa before everything went hell and both men ended up in an English hospital together with severe burns. I'm a sucker for a good love story, so I also added Eva, the love of Jack's life, an English nurse he meets while recovering in London. Most of the book and it's supernatural mystery take place once Chambers and his platoon go on a covert mission behind German lines and come across the abandoned church and discover the deadly secrets down inside the Nazi bunker. I also came up with a cast of Nazi villains, based on real Occult Nazis who were part of a secret brotherhood called The Black Order. This is true historical fact. The novel's opening scene takes place at the Wewelsburg Castle in Westphalia, Germany. This place truly exists. I show the Black Order, led by none other than Hitler's second in command, Heinrich Himmler, gathered like kights of the round table, which they did.

I came up with the idea of starting the novel with Jack Chambers as an old man suffering from nightmares about what he experienced during the war. 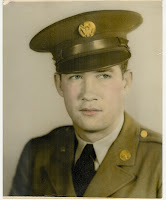 This inspiration came from my own grandfather who would never talk about the war. Captain Dawson "Hank" Moreland" flew C-47's over Normandy, dropping off paratroopers and delivering supplies. You can read his full story on this page of my website: http://brianmoreland.com/wwiiresearch/awarhero.html

As a kid, while staying with my grandparents, I once came across an army footlocker that was locked. I asked my grandfather what was in it. He said photos and letters from his war days. I asked to see them, but his eyes clouded over and he said he could never open up that locker. That filled my young, imaginative mind and I wondered what horrors my grandfather must have experienced. That he had this secret past life that he wouldn't share with the family. So the retired Jack Chambers is based on my grandfather. After a near-fatal heart attacked he is visited by his grandson, Sean Chambers, whom I based after myself. Jack Chambers finally decides to tell his grandson the secrets he's kept all these years. He gives him a war diary and it tells the whole story of the horrors that slaughtered Chambers' platoon back in 1944. Next I'll talk about I how researched the novel.
Posted by Brian Moreland at 9:19 PM