Do you like to read about haunted buildings? Today, guest writer, Claire Fryer, shares some creepy unexplained stories about a mysterious asylum that you can visit, if you dare:

Volunteer tour guide Caroline Daniels was accustomed to the air of suspense that came with visits to the abandoned asylum. Although her presentations were limited to the historic nature of the Trans-Allegheny Lunatic Asylum, stories of the unexplained occurrences in the 500,000 square foot complex brought ever-more seekers of the paranormal to explore Weston, West Virginia’s national historic landmark. 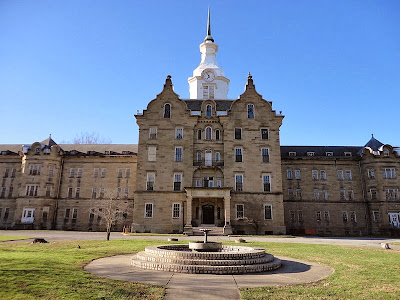 Caroline was familiar with the stories. She had heard claims of seeing shadows and hearing doors slam, but these seemed simple enough to dismiss. She did have one colleague, Brenda Reed, whose on the job experience was a bit more unnerving. One day, Brenda chased after a tour group member who had wandered off only to discover that he had vanished. When asking the other group members if they knew him or where he might have gone, they claimed that no one was missing and that no one else had seen this wandering gentleman.

Despite this, and the paranormal questions that sometimes arose, Caroline continued to lead groups while highlighting the extraordinary history of the site. Established in 1858 and built over 20 years, the asylum opened its doors in 1864. It was originally designed to be an entirely self-sufficient estate capable of housing 250 patients, many suffering from mental illnesses and addictions.

Groundbreaking at the time, and long before the days of modern dual diagnosis addiction treatment, Tran-Allegheny instigated new ways of treating the mentally challenged, drug-addicted and psychologically disturbed by providing them treatment that was separated from criminal incarceration. The idea was so inviting that the facility eventually housed more than 2,500 patients. Their treatments included mass lobotomies, performed by visiting physicians as leaders in psychological illness at the time.

The site was expanded, including a ward for the criminally insane that once housed Charles Manson. Throughout the 20th century, the hospital was sited numerous times for being overcrowded, unsanitary and inhumane. With little hope of rehabilitating the site, the asylum closed its doors in 1994. As during its tenure as a hospital, the site is still used for occasional community events but has had no new lease on life. The tours however have remained an active attraction. So much so that evening tours were added in 2007. 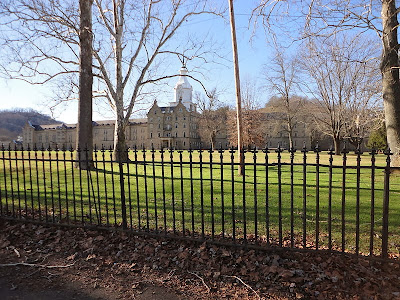 It seems logical enough that tourists and locals alike could enjoy the fun of getting spooked, roaming the dark halls of the abandoned asylum. The passing amusement of the asylum came to a screaming halt for Caroline, however, during one of her daytime tours. As she had done so many times before, the guide brought her group to what is known as the “Civil War” wing of the building. Here they stopped in front of “the stretcher room” where Caroline began to feel a tugging at her shirt. She turned to see nothing behind her and the now unexplained phenomena escalated. What began as pulling at her clothes became an all-out wrestling match dragging Caroline to the ground. Invisible forces dragged her into the stretcher room and across the floor. Caroline flailed her arms and legs in an attempt to counteract whatever had a hold of her but to no effect. Eyewitness Jeaneth Boyer described her attempts to cease the movement of her tour guide across the room, a feat only made possible by finally sitting on Caroline to break her free of the unseen hold on her body. Caroline darted from the building, visibly and palpably shaken.

With accounts of paranormal events on the premises mounting, the owners of the asylum sought evidence of just what may be causing such phenomena. They called in a professional paranormal investigative team that spent a night at the location with an array of surveillance equipment. Over the course of the evening, the team heard voices, shadows and sounds that they attempted to connect to some known source. Time and again, there was no explanation for events such as the sound of a child’s laughter or voices whispering “Go Home.”

Although Caroline's experience was never replicated, the investigative team encountered an entirely different disturbing scene while attempting to communicate with whatever may be lurking at the asylum. The team leader asked into the air, “help us understand…Let us into your world.” Almost immediately thereafter, he and his partner witnessed a figure dressed in a white robe, crouch into a corner before being sucked into a wall and out of existence.

Posted by Brian Moreland at 1:15 PM